From the Inside the Apple archives: 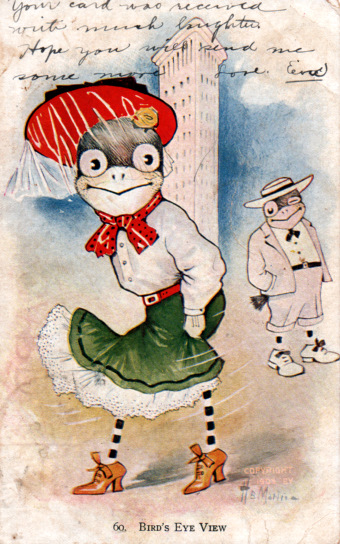 This postcard was made in 1908 and shows two birds ("Bird's eye view"--get it?) outside the Flatiron building at Fifth Avenue and Twenty-third Street. Because of the Flatiron's unique shape and its location along a broad crosstown thoroughfare, strong winds swirl near its base. When the building first opened, men used to flock to Madison Square to watch women walking by in the hope that the air currents would sweep up their skirts and reveal a glimpse of stocking.

This is exactly what is depicted in the postcard above: the gentleman in the background is giving a knowing wink as the lady's skirt and petticoats blow up, revealing her ankles. How risque!

In real life, there were a number of police officers posted to the Flatiron to encourage ogling men to move along. One common phrase they employed was "twenty-three skidoo!" Skidoo is a relative of skedaddle and means "to move along" or "go away." The number 23 was long thought to be a reference to the Twenty-Third Street; thus "23 skidoo" meant "stop hanging out on Twenty-Third Street."

However, it turns out that "23" was already a slang term for "get lost" before there was a Flatiron building, cited at least as early as 1899. What seems plausible is that the police wanted to get rid of men in front of the Flatiron, so combined two already existing phrases that each meant scram--"twenty-three" and "skidoo"--into a phrase that had a double meaning. Soon, "23 skidoo" was one of the most popular phrases in America--it is still sometimes employed today, over a century later.

Read more about the dawn of the skyscraper era in

Posted by Michelle and James Nevius at 4:35 PM