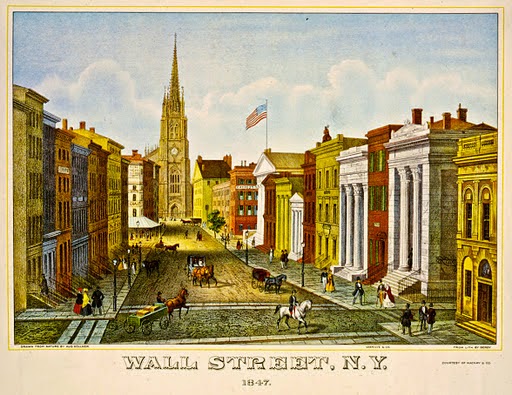 A couple of days ago, we wrote about Frederick Muhlenberg, the first Speaker of House. When Congress first met, 225 years ago, its headquarters was in Federal Hall at the corner of Nassau and Wall streets.

Here's a view of Wall Street (not, technically, a postcard) from 1847, showing how the street had developed in the 70 years following Washington's inauguration. Rising up on Broadway is the familiar tower of Trinity Church, which at the time would have been brand new. The building flying the large American flag is what we today call Federal Hall National Memorial. It was also relatively new, having been opened five years earlier to serve as the United States Custom house. It would later become the U.S. Sub-Treasury before turning into a tourist attraction.

By 1847, Wall Street was the undisputed capital of the city's financial district; the other gleaming marble buildings you see lining the street were banks. However, all was not well in the financial markets: the failure of the harvest in Great Britain sent its economy into a panic, and the ongoing famine in Ireland reached its peak that year, sending over 200,000 Irish immigrants to New York.

What a contrast this serene street scene is from the view one would have had of Orange or Anthony streets in the heart of the Five Points, less than a half-hour walk away. The area around that intersection would soon become one of the most densely populated--and poorest--places in the country.

* * * *
Read more about New York in 1840s in
Footprints in New York: Tracing the Lives of Four Centuries of New Yorkers

Posted by Michelle and James Nevius at 12:59 PM