The Battle of Lake Erie 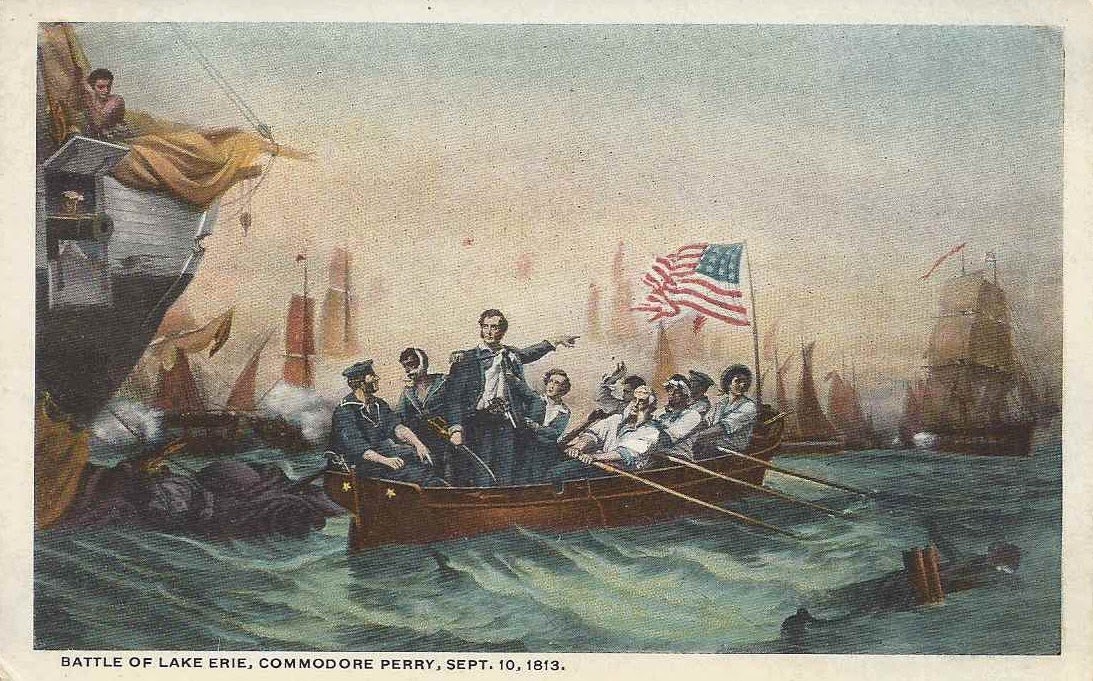 Today's postcard takes us back to the Battle of Lake Erie, which was a decisive American victory in the War of 1812. This image shows Commodore Oliver H. Perry transferring his colors from his wounded vessel, the USS Lawrence, to the USS Niagara. After taking command of the Niagara, the British expected the Americans to retreat; instead, Perry pressed the attack, and by 3:00 p.m., the British had surrendered--the first time in history that an entire British naval squadron had surrendered.

The figure seated in the boat tugging on Commodore Perry's coat is his brother, Alexander, who was a midshipman on the Lawrence. A third Perry brother, Matthew, also served on the Lawrence that day. He would go on to become a Commodore himself and "open up" Japan (by use of force) to western trade in the 1850s. Today, by the way, is Matthew Perry's birthday--he was born April 10, 1794.

Though Rhode Islanders by birth, the Perrys had many connections to New York City. One of Oliver Perry's daughters married John LaFarge, the great painter and stained-glass artist, whose work can be seen around the city. One of Matthew Perry's daughters was the wife of August Belmont, the banker and horse-racing enthusiast who gave rise to the Belmont Stakes. Matthew Perry was originally interred in the churchyard of St. Mark's-in-the-Bowery on Second Avenue, but eventually he and brother Oliver (who'd been buried in Port-of-Spain, Trinidad), were both exhumed and moved to the Island Cemetery in Newport, Rhode Island.

Though the postcard above (based on an 1865 painting by William Henry Powell) shows Perry transferring the Stars and Strips to the Niagara, the Commodore's battle ensign was actually emblazoned with the words "Don't Give Up the Ship," the exhortation of his friend James Lawrence, who'd died on June 4, 1813, and for whom the USS Lawrence was named. Lawrence is buried at Trinity Church, Wall Street.

* * * *
Read more about New York's role in the War of 1812 in
Footprints in New York: Tracing the Lives of Four Centuries of New Yorkers

Posted by Michelle and James Nevius at 12:17 PM