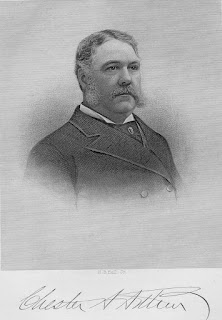 While many United States presidents have called New York home over the years, only two were inaugurated in the city: George Washington in 1789 (when the city was still the American capital) and Chester A. Arthur, who took the oath in his home at 123 Lexington Avenue in Murray Hill.

A lawyer by training, Arthur had risen through the ranks of the Republican Party to become the Collector of the Port of New York, a job secured for him by powerful Senator Roscoe Conkling. When Rutherford B. Hayes became president in 1877, Arthur lost his patronage job—in part so that Hayes could show that he was cracking down on patronage positions. But in 1880, Arthur was tapped to be James A. Garfield’s running mate, and in March 1881, was sworn in as Vice President. (The presidential and vice presidential inauguration was still in March back then.)

Just four months after the inauguration, Garfield was shot by Charles Guiteau, a disgruntled civil servant. Garfield lingered until September 19, when he finally succumbed to his wounds. 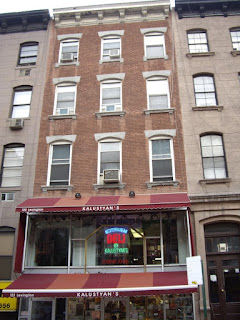 Word was immediately sent to Chester Arthur, who was at home in Murray Hill. In the middle of night, New York Supreme Court Justice John R. Brady was fetched to come to the Arthurs’ home and administer the oath of office. A second, more formal inauguration took place two days later in Washington, DC.; evidently, some in D.C. weren't convinced that Arthur's late-night swearing-in on Lexington Avenue was the real deal, so he was asked to take the oath again once he got to Washington.

After his one term in office—marked by distinct efforts at civil service reform—Arthur retired to his Lexington Avenue home where he died on November 18, 1886. The house at 123 Lexington still stands, but the only part you can visit is the ground-floor retail section, which is the Indian grocery store Kaluystan’s.

Arthur is commemorated with a statue in Madison Square Park, within easy walking distance of his former home. Also in the park is a statue of his one-time mentor, Roscoe Conkling, who's best known today for dying after getting stuck in a snow drift during the great Blizzard of 1888.


This post was adapted from an earlier article on Arthur in January 2009.

Posted by Michelle and James Nevius at 10:14 AM