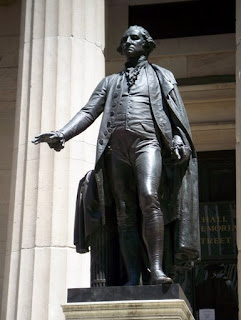 Though every year millions of people pass the elegant statue of Washington that stands on the front steps of what is now called Federal Hall National Memorial, few remember the crucial role that New York played in the fledgling government.

In May 1787, the Constitutional Convention began in Philadelphia, which was America’s largest city and had long served as America’s political center. But congress itself had not been meeting in Philadelphia since June 20, 1783, when the State House had been surrounded by mutinous Pennsylvania soldiers looking for their Revolutionary War back pay. Under the Articles of Confederation, the federal government lacked the power to disburse the mob—and Pennsylvania’s executive committee refused to do so—forcing congress to flee to Princeton, New Jersey. Over the next two years, the seat of congress moved a few times until finding a home in New York City.

As part of the new Constitution, the states agreed to have a capital city that was not governed by a state, thus heading off another Pennsylvania debacle, and Alexander Hamilton’s preference was for that city to be his own. Pierre L’Enfant, who would achieve great fame as the master planner of Washington, D.C., remodeled the old British City Hall on Wall Street to serve not only as the meeting place for congress and the new chief executive but also continue to house New York City’s government offices. On March 4, 1789, congress and the Electoral College met there for the first time and unanimously selected Washington as the nation’s first president. On April 30, he was sworn in on the second floor balcony in a short ceremony before retreating inside to address a joint session of congress.

The old Federal Hall is, alas, gone. The building you see today on Wall Street is an 1842 Treasury Department building designed by Ithiel Town. It first served as the U.S. Custom House and later as the Federal Subtreasury, where gold bullion was stored.

Posted by Michelle and James Nevius at 3:07 PM