In the year of who knows when.

Opened up his eyes

To the sound of an accordion.

Today marks both the birth and the death of one of New York’s most famous gangsters, “Crazy” Joe Gallo. 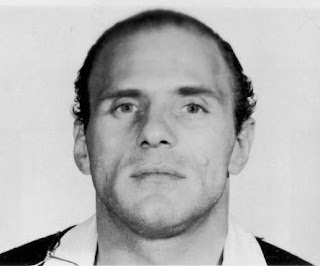 Though Bob Dylan claimed he’d been born “in the year of who knows when,” Gallo was actually born April 7, 1929, in Red Hook. His life of crime began when he and his brothers became enforcers for the Profaci family in the 1950s. After successfully carrying out the murder of Albert Anastasia at the Park Sheraton Hotel, Crazy Joe asked Joseph Profaci for a bigger cut of the action. When Profaci refused, a turf war broke out between the Gallo brothers and the Profacis—a bloody fight that continued well into the 1960s even after Gallo was sent to prison for ten years for extortion and Joseph Profaci died of cancer, handing the reins of the family to Joseph Colombo.

Crazy Joe was released from prison in 1971 into a whirl of publicity. Jimmy Breslin’s book The Gang That Couldn’t Shoot Straight—a humorous take on the Gallo/Profaci war—had been released in 1969 and filmed in 1971. In the film, Jerry Orbach—later of Law and Order fame—played “Kid Sally,” the character based on Gallo. Crazy Joe wasn’t thrilled with the performance, so invited Orbach and his wife over to dinner to set them straight. They were amazed at his knowledge of art and literature—as Marta Curro Orbach later said, “When he asked me whether I preferred Camus or Sartre, I almost fell into a plate of spaghetti.” The Orbachs quickly became some of Gallo’s closest friends, introducing him, in turn, to their friends in the world of theater and publishing.

However, the friendship was not to last. On April 7, 1972, Gallo celebrated his birthday with the Orbachs and other friends at the Copacabana. After the party broke up, Gallo, his wife, and his body guard, Pete “the Greek” Diapoulas decided to head to Little Italy for a quick bite at Umberto’s Clam House. Uncharacteristically seated with his back to the door, Gallo didn’t notice a gunman enter the restaurant until it was too late. He leapt up and ran toward the hail of bullets—probably to draw fire away from his wife—and staggered out on to Mulberry Street, where he died.

While Umberto’s still exists in Little Italy, it is no longer in its original location. The spot where Gallo was killed, at the corner of Hester and Mulberry, is now Da Gennaro. Umberto’s moved to Broome Street a few years after the murder.

Gallo’s life is not only recounted in The Gang That Couldn’t Shoot Straight and Bob Dylan’s Joey (from the album Desire), it was also made into a film called Crazy Joe in 1974 starring Everybody Loves Raymond’s Peter Boyle.

More about Little Italy -- including a walking tour of famous and not-so-famous sites -- can be found in our book Inside the Apple, which is now available. For more information about the book and our upcoming talks and walking tours in New York, visit http://www.insidetheapple.net.

Posted by Michelle and James Nevius at 12:25 PM

Thanks Insiders! Great work on this.