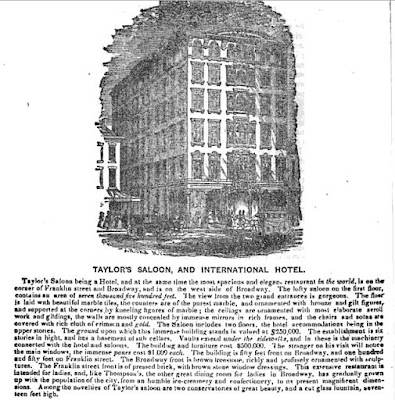 Yesterday, Curbed posted a short article about the renovation of 365 Broadway, which is being turned into 20-unit residential building.

The most famous tenant at 365 Broadway is undoubtedly Taylor’s Saloon, once one of the poshest restaurants in New York. As Scribner’s Magazine noted in 1911:

The founder of the business, John Taylor, established in 1851 a restaurant that was notable in its day, and later, at the corner of Broadway and Franklin Street. Taylor's Saloon, as it was then called, was looked upon as one of the most magnificent restaurants in the world.

The lofty saloon on the first floor, contains an area of seven thousand five hundred feet. The view from the two grand entrances is gorgeous. The floor is laid with beautiful marble tiles, the counters are of the purest marble; the ceilings are ornamented with bronze and gilt figures, and supported at the corners by kneeling figures of marble; the ceilings are ornamented with the most elaborate scroll work and gildings, the walls are mostly concealed by immense mirrors in rich frames, and the chairs and sofas are covered in rich cloth of crimson and gold.

(The italics, needless to say, are in the original.)

According to historian Charles Lockwood (who wrote about Taylor’s in his book Manhattan Moves Uptown), the restaurant served 3,000 people most weekends and “on Sunday afternoons and evenings people waited on line outside for an hour or more before getting a table.”

The restaurant was not only known for its sheer opulence, but for its accommodation of women. In an era when most eateries were the domain of men, Taylor’s was listed in Carroll’s New York City Directory* as one of five “saloons suitable for ladies.”

Taylor’s, however, was more than just a place for women to dine while shopping at the fashionable Broadway stores. It was an excellent pre- or post-theater destination—back when the theater district was also on Lower Broadway—and in its basement was the gentleman’s dining room, where men could enjoy each other’s company in the absence of female distraction.

More about Lower Broadway in its fashionalble heyday can be found in our new book, Inside the Apple, available from Amazon or wherever books are sold!

Posted by Michelle and James Nevius at 3:31 PM