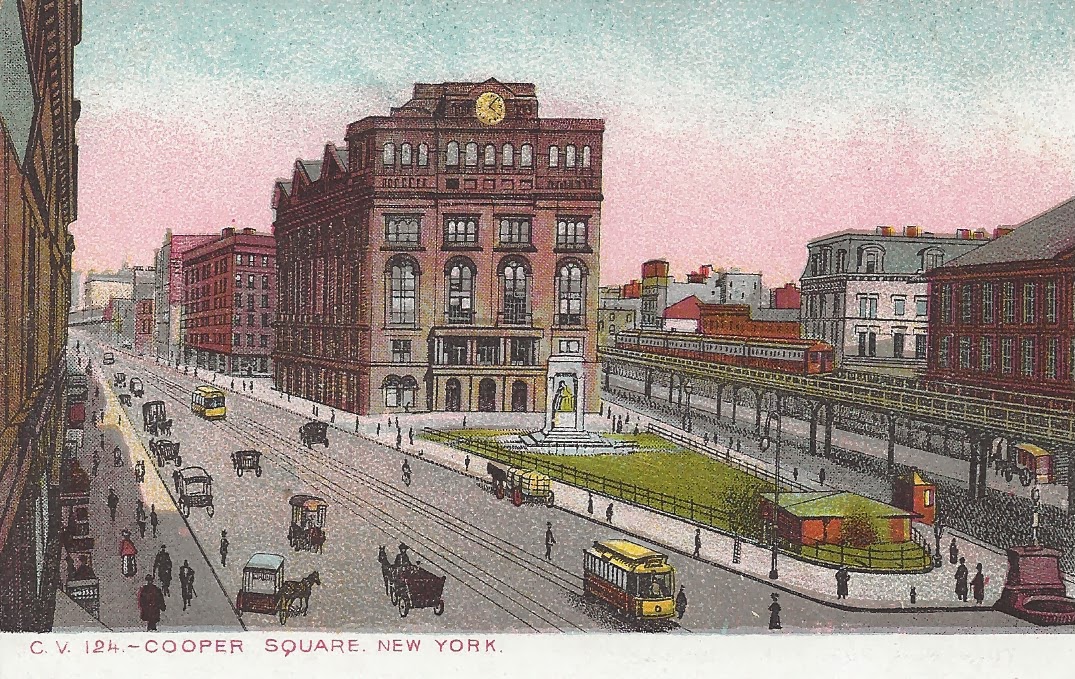 Today, February 27, marks the anniversary of Abraham Lincoln's famous 1860 Cooper Union Address (his "Right Makes Might" speech), which many credit with garnering him the Republican nomination in 1860.

The Cooper Union—depicted above in a postcard from ca. 1905—is a remarkable place. As we write in Inside the Apple:


Peter Cooper was one of the first generation of self-made men in America. In his early career, he was an apprentice coach maker and hat maker before moving on to earn his first fortune in glue. As he later commented: "I have always tried to do the best I know how, and then people have wanted what I made. I determined to make the best glue, and found out every method and ingredient looking to that end, and so it has always been in demand."

In fact, Cooper was so determined to make the most out his factory that he figured out how to take a byproduct of the glue-making process and turn it into edible gelatin. (A few years later, a pharmacist would add cough syrup to the gelatin and give the world Jell-O.)

The money Cooper made in the glue business allowed him to invest in an iron works (which later produced the first beams necessary for cast iron architecture.) He was hired by the Baltimore & Ohio railroad to design and build the first American-made steam locomotive, the Tom Thumb, which debuted in 1830. By the 1840s, Cooper was one of New York’s 25 millionaires, and he had done it all without the benefit of a formal education....In 1854, Cooper...endowed and built the Cooper Union for the Advancement of Science and Art, a free institution emphasizing engineering and practical arts. (It is notable that practical arts included painting and sculpture; the handsome sculpture of Cooper that sits in front of the building is by Augustus Saint-Gaudens, a Cooper Union graduate.) The building went up at the junction of Third Avenue and the Bowery and contained a round elevator shaft—even though Elisha Otis had not yet installed any elevators—because Cooper felt that a round elevator would be the most efficient design. (The elevator shaft still peeks above the building like a chimney.) Using his own strong iron for the interior columns, Cooper also designed the single largest lecture space in the city, the Great Hall, which could accommodate over 2,000 people.

While you can't see the round elevator shaft in the above image, you can see, very vaguely, the Saint Gaudens statue in front of the building.

We take up the story in Footprints in New York:


[On February 27, 1860] Lincoln addressed a huge audience at Cooper Union... Industrialist and inventor Peter Cooper had built the school just a year earlier as a free institution of higher learning. The Great Hall remains one of the largest lecture halls in New York, and, as anticipated, Lincoln drew a standing-room crowd.

The speech...was divided into three sections. In the first, Lincoln laid out a lawyerly argument that the thirty-nine signers of the Constitution—“our fathers who framed the Government under which we live,” he called them (quoting his antagonist, Senator Stephen Douglas)—were against the expansion of slavery. In the second section, Lincoln addressed Southerners directly, admonishing them for being the ones stirring up dissent:

Your purpose, then, plainly stated, is that you will destroy the Government, unless you be allowed to construe and enforce the Constitution as you please. . . . You will rule or ruin in all events.

Lincoln closed with the stirring lines that would soon be repeated in newspapers across the country—in all capital letters, as if he were shouting:

LET US HAVE FAITH THAT RIGHT MAKES MIGHT, AND IN THAT FAITH, LET US, TO THE END, DARE TO DO OUR DUTY AS WE UNDERSTAND IT.

Though the Cooper Union itself still stands from Lincoln's era, much of the area has undergone radical transformation--and not all of it recent. In the 1870s, the Third Avenue El was built (in the postcard, it runs on the east side of the building), only to be torn down in the 1950s. Also, in place of the building at the far right of the postcard, Cooper Union constructed Thom Mayne's undulating academic building, just one of many modern structures remaking the Bowery. Of course, what has put Cooper Union more in the news recently is its decision, for the first time in its history, to begin charging tuition beginning with the 2014-2015 academic year.

and in our next book

Posted by Michelle and James Nevius at 11:52 AM