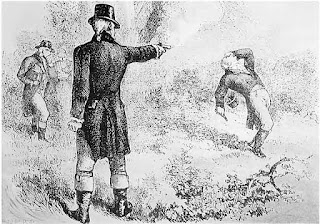 Today marks the 207th anniversary of the famous duel between then-Vice President Aaron Burr and former Treasury Secretary Alexander Hamilton. We blogged about the duel last year (and dedicated a chapter to it in Inside the Apple), but there have been a couple of new developments in the past year, most excitingly the imminent reopening of Hamilton's Harlem home, the Grange.

As the National Park Service notes:


The Grange has been closed to the public for nearly five years, going through a move and an "extreme makeover" designed to make Alexander Hamilton's "sweet project" look and feel as welcoming to us as it did to Hamilton and his family when they moved in in 1802.

The house was built by John McComb, Jr., the architect responsible for Castle Clinton in Battery Park and, along with Francis Magnin, New York's City Hall. Hamilton wanted to move his family to the heights of Harlem to get them away from the hustle and bustle--and disease--of the city. However, Hamilton only got to occupy his home, originally set in a vast, 32-acre property, for less than two years before being killed by Burr. In 1899, the house was moved about four blocks from its original location in Hamilton Heights to a lot owned by St. Luke's Church near the corner of Convent Avenue and 140th Street. Over the years, the house was surrounded by a church on one side and an apartment block on the other. As early as 1962, the National Park Service began thinking about relocating the home again.

That move finally took place in June 2008, when the house was jacked up off its foundations and rolled to a new site in St. Nicholas Park off 140th Street. The Grange's new location is more reminiscent of what Hamilton would have experienced when he lived in the house.

The house is set to reopen on September 17. It is worth noting that the other famous colonial house in Harlem, the Morris-Jumel Mansion, was the place where Aaron Burr got remarried in 1833 (to the home's owner, Eliza Jumel) and where he lived toward the very end of his life.

Read more about the history of Hamilton, Burr, and Colonial Harlem
Inside the Apple: A Streetwise History of New York City.
To get RSS feeds from this blog, point your reader to this link.
Or, to subscribe via email, follow this link.