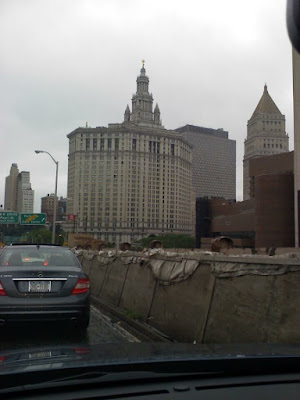 A reader and fan of Inside the Apple sent along the above photo and asked if we could delve a little into the history of the building. It is the Municipal Building, built 1909-14 by William Kendall, a junior partner in the venerable firm of McKim, Mead, and White. It was the first foray of that firm into skyscraper building, and it had a huge impact on the form--at least in the Soviet Union.

Despite its importance to New York City, many people aren't familiar with the Municipal Building, which sits at the intersection of Chambers and Centre streets. (Originally, Chambers Street actually went through the loggia and connected traffic to the Lower East Side; the construction of One Police Plaza in 1973 forced Chambers Street to dead-end.)

Starting in the last decades of the 19th century, the city began contemplating tearing down its 1812 City Hall, which was too small for the modern workings of government, and replace it with a grander building. They even went so far as to have a design contest, which was won by John Rochester Thomas. Meanwhile, a plan was concocted to move the old City Hall to 42nd Street and use it to house the New York Public Library. In the end, however, the American Scenic & Historic Preservation Society--one of the first preservation groups in the country--prevailed on the government to leave City Hall alone. Thomas's new City Hall was built, with modification, on Chambers Street, and became the Surrogate's Court.* This meant that the city was still in dire need of more office space for its workers--especially after January 1, 1898, when New York consolidated the five boroughs into one city.


With consolidation, New York was, without question, America's largest city, and many felt it needed a true Civic Center to match. Only fifteen years earlier, the city had began systematically destroying the old Five Points neighborhood, which lay just north of Chambers Street, and over the first three decades of the 20th century, the building of the Civic Center allowed the city to clear the worst blocks of the Five Points. In rapid succession, the city, state, and federal governments erected the Municipal Building, Supreme Court, U.S. Court, Department of Health, and what's now called the Louis J. Lefkowitz State Office Building, in the area that only a few years earlier had been teeming with immigrant families.


The architecture of the Muncipal Building reflected New York's place in the world--and Manhattan's place in New York. The top of the building is crowned by Civic Fame by Adolph Weinman--the second tallest statue in New York after the Statue of Liberty, though no one can agree how tall it is: sources list it as 20 feet, 25 feet, and 30 feet. The figure represents New York leading the way into the future, a beacon for other cities to follow. (Being famous, in this instance, meant "setting a virtuous example for future generations" and not "being Kim Kardashian.") The statue sits atop a high tower that is surrounded by four smaller towers. The big tower is Manhattan--the four other towers are the outer boroughs, surrounding Manhattan like satellites. 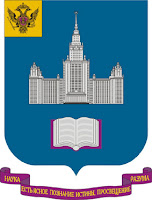 The Municipal Building was evidently greatly admired by, of all people, Josef Stalin. Certainly copies of it soon began popping up all over Moscow and around the Soviet bloc, from Moscow University (pictured at right, on the school's crest) to the Hotel Družba in Prague.


Until 2009, many New Yorkers only knew the Municipal Building as the place to go for a civil marriage ceremony. However, that has moved to the Lefkowitz State Office Building, just a couple of blocks north, where, in just a few days, hundreds of couples will celebrate New York's marriage equality law.


* Thomas's Surrogate's Court building, based on the Opera in Paris, is the subject of a blog post we're working on right now. Don't change that dial!

* * *
Do you have a picture of building in New York that you want to know more about? Send it to info@insidetheapple.net and we'll see what we can dig up!

Read more about the Five Points and the Civic Center in
Inside the Apple: A Streetwise History of New York City.
To get RSS feeds from this blog, point your reader to this link.
Or, to subscribe via email, follow this link.
Posted by Michelle and James Nevius at 1:29 PM

Yay! Thanks for the GREAT answer!

It's so interesting to think that dozens of copies of the municipal building are all over Russia of all places!