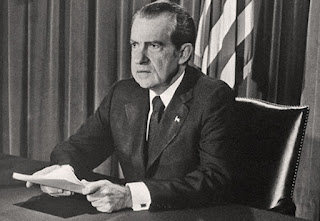 After he resigned from the presidency on August 8, 1974, Richard Nixon began to put the pieces of his life back together. Knowing that he would not be allowed to practice law, he resigned from the California bar, as well as the bar of the U.S. Supreme Court. However, when he attempted to resign from the New York bar, the New York Bar Association turned him down. If they were to accept his resignation, they argued, he would need to publicly acknowledge that he had obstructed justice in the Watergate affair. And since Nixon wasn't going to do that, they weren't going to just let him quietly resign. Instead, they disbarred him.

On July 8, 1976, in a 4-to-1 decision, the Appellate Division of the State Supreme court (in the words of The New York Times): "sustained five charges that Mr. Nixon had obstructed 'the due administration of justice' and thus violated the Code of Professional Responsibility, a set of rules that all lawyers are required to observe."

However, while this public rebuke--the only time that a court of law found Nixon guilty of anything relating to Watergate--must have stung, the former president was probably paying little attention. The previous day, his wife Pat had suffered a stroke in their swimming pool at their home in California; on July 8, she was rushed to Long Beach Memorial Hospital.The stroke left her paralyzed on her left side (though she was able, through physical therapy, to regain much of her movement). The former first lady suffered a second stroke in 1983, and died in 1993. President Nixon died a year later.

Nixon's disbarment wasn't the only problem he faced in New York; in 1979, he attempted to purchase a condo apartment at 817 Fifth Avenue. Rarely do condo boards turn anyone down, but in this case, the board decided to buy the vacant apartment themselves rather than let the former president move in.

Read more about the history of the Presidency in New York in
Inside the Apple: A Streetwise History of New York City.
To get RSS feeds from this blog, point your reader to this link.
Or, to subscribe via email, follow this link.
Posted by Michelle and James Nevius at 1:36 PM