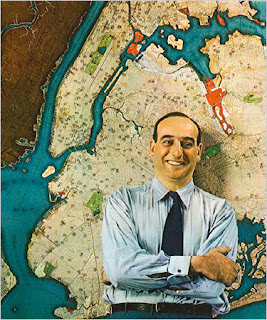 Today marks the thirtieth anniversary of the death, at age 93, of Robert Moses, probably the person with the single greatest influence on the shape of New York in the 20th century.


As we write in Inside the Apple, “There is perhaps no figure in New York City’s history more likely to set off a heated debate than Robert Moses. Everyone, it seems, has an opinion about the ‘Power Broker’ (as Robert Caro called him), and he is vilified and praised in equal measure—often in the same breath.”

A short blog entry is not enough to do Moses justice, but consider some of the projects that he had a hand in during his tenure:
The list is endless and these are just a fraction of the projects that came about under his stewardship. At one point, Moses simultaneously held twelve different state and city offices, from being in charge of slum clearance to running the highways to overseeing the parks.

Of course, not every project was welcomed and many never came to fruition, such as his idea to run a Lower Manhattan Expressway across the Lower East Side and SoHo. As we note in Inside the Apple:

By the late 1960s, Robert Moses’ influence in New York was on the wane. His last big project in the city had been the 1964 World’s Fair in Flushing Meadows, Queens, and he had retired from most of his official positions. What ended up as his last great fight was the battle of the Lower Manhattan Expressway (sometimes called LOMEX), a road that had first been proposed in 1929 and did not ultimately go down in defeat until 1969.

The purpose of the expressway was to relieve downtown traffic and connect the Williamsburg and Manhattan Bridges to the Holland Tunnel. By the 1940s, Moses was proposing an eight-lane elevated highway roughly following the paths of Broome and Delancey Streets across the island. To Moses and other urban planners, the area that LOMEX would traverse—not yet called “SoHo,” a moniker that would come into use in the late 1960s—was the definition of urban blight.

Had the expressway been built, a number of wonderful cast-iron structures would have been lost—indeed, the city was well on its way to tearing down SoHo in its entirety. Luckily, Jane Jacobs and the Joint Committee to Stop the Lower Manhattan Expressway convinced the city’s Board of Estimate not to move forward and SoHo was saved.

Read much more about Robert Moses's influence in
Inside the Apple: A Streetwise History of New York City.
To get RSS feeds from this blog, point your reader to this link.
Or, to subscribe via email, follow this link.
Posted by Michelle and James Nevius at 12:57 PM