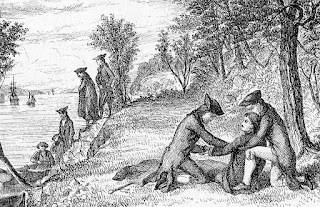 Two-hundred-and-six years ago today, at approximately two o'clock in the afternoon, Alexander Hamilton died in Greenwich Village, the victim of a bullet fired by Vice President Aaron Burr.


Hamilton, originally from Nevis in the British West Indies, had come to New York to study at King's College (today's Columbia University). He joined the Continental Army in 1776 and within a year was Washington's aide-de-camp, a role that in many ways he never relinquished. Part of a trio that formed Washington's first cabinet, Hamilton had disproportionate sway as Treasury Secretary--biographer Ron Chernow has called him Washington's de facto Prime Minister.


After leaving Washington's cabinet, Hamilton worked as an attorney in New York; founded the city's oldest paper, the New York Evening Post (as a mouthpiece for his Federalist agenda); and made life difficult for people like Aaron Burr. Burr served as Thomas Jefferson's first Vice President, but in 1804 he discovered he was being left off the ticket in favor of New York Governor George Clinton.

[When this happened,] Burr chose to run for Governor [of New York] himself. When he lost, he blamed it, in part, on the conniving of people like Alexander Hamilton. While politicians often attacked each other in print, it was done using pseudonyms or by attacking the party rather than the person. However, at a dinner party in Albany in March 1804, Hamilton and other anti-Burr Federalists had a grand time describing why Burr was incapable of being “trusted with the reins of government.” One guest at the dinner, Dr. Charles Cooper, wrote a letter to a friend recounting the event; the letter was leaked, and before long Hamilton’s Evening Post was refuting its contents publicly. This caused Cooper to write a follow-up, published in the Albany Register, in which he declared that everything he’d said was true—and there was more. Had he wished to, Cooper could have recounted Hamilton’s “still more despicable opinion…of Mr. Burr.” It was these words—“despicable opinion,” which were not even Hamilton’s—that would eventually get him killed.

When Hamilton refused to apologize to Burr, the Vice President challenged him to a duel. Since New York City had sensibly banned dueling, they headed across the Hudson to Weehawken, New Jersey, on the morning of July 11, 1804. Much has been written about each man's intentions that morning, but the facts are these: Hamilton missed and Burr shot Hamilton straight through the stomach and liver. Hamilton was rushed back to New York and the next day, July 12, died, soon after his wife Eliza had reached him from their home in Harlem.
Hamilton is buried in the south yard at Trinity Church, Wall Street. If you work in that neighborhood or are visiting today, stop by and you'll see lots of coins on the grave--a memorial to America's first financial wizard.

Read more about Hamilton, Burr, and Revolutionary New York in
Inside the Apple: A Streetwise History of New York City.
To get RSS feeds from this blog, point your reader to this link.
Or, to subscribe via email, follow this link.

Posted by Michelle and James Nevius at 1:36 PM

I'm doing research on some New Amsterdam and colonial New York families; the Deys and Varicks in particular. Do you know if "Neafie" is a spelling variation of Nevius?

Yes - Neafie (and Nafey, Naphey, etc.) are common variants of Nevius. Good luck in your research!

Thanks. The Nevius/Neafies bought the Dey Mansion (now a museum in NJ)after 1800). I recall reading that one of the Nevius clan was a great Shakespearean actor. The last Dey to live in the mansion was David Dey, a Rev. War minuteman who married a Neafie.