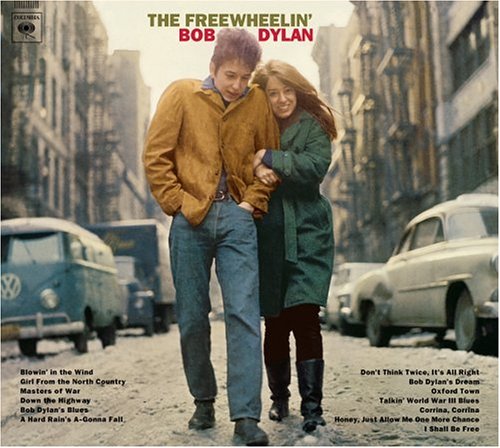 Dylan was born in Duluth, Minnesota, on May 24, 1941; after dropping out of college, he relocated to New York City in 1961 to pursue a music career and meet his idol, Woody Guthrie. (You can read much more about Dylan coming to NYC in our blog post about Dylan from a couple of years ago.)

Dylan lived a number of places in New York over the years – on West 4th Street (which gave rise to “Positively 4th Street”), on MacDougal south of Bleecker, in the Chelsea Hotel (whose coughing heat pipes are memorialized in “Visions of Johanna” and which gets a shout-out in “Sara”), and at that “crummy hotel overlooking Washington Square” that Joan Baez so poignantly describes in “Diamonds and Rust.”

If you are looking for ways to celebrate, Patell and Waterman’s History of New York has compiled a good list of Dylan-related links, including WBAI’s 23-hour Dylan marathon.
* * *

Read more about Dylan in New York in
Inside the Apple: A Streetwise History of New York City.
To get RSS feeds from this blog, point your reader to this link.
Or, to subscribe via email, follow this link.
Posted by Michelle and James Nevius at 8:36 AM