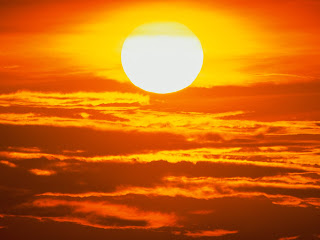 As temperatures rise and cooling centers open around the city today, it’s good to remember how wonderful air conditioners are. Our predecessors have weathered some terrible heat waves in New York.

The hottest June day on record is in some dispute, but June 29, 1934, June 27, 1966, and June 25, 1952, are each contenders, with the mercury perhaps reaching 101 degrees. The New York Times reported in 1934 that the official temperature reached 97 degrees (101 in Central Park, which was not then the official reading) and that temperatures soared to 137 degrees in the full sun in the park. To gain relief from the scorching heat, children frolicked in city fountains (including Civic Virtue, then still in front of City Hall), and perhaps as many as 8,000 people brought blankets to Coney Island to sleep at the beach.
Back in the 19th century, stifling heat waves were less frequent—but certainly more deadly. On September 7, 1881, the temperature reached 101 degrees and the Times wrote:  “Sept. 7, 1881, will long be remembered, not merely as the hottest day of the year, but as one of the hottest of the century.” The streets of the city were deserted except for those forced out in the heat, which unfortunately included the city’s many horses, some of whom died of heat stroke as they worked. The only crowds to be found were those “crowded all day long around the bulletin boards giving the news from the bedside of President Garfield.” (Garfield had been shot July 2nd and clung to life until September 19, when he finally succumbed to the assassin’s bullet.)

By far the worst heat wave to strike the city came in August 1896, when over 1,300 people died in the city, many of them stifled to death in tenement apartments that since 1879 were supposed to allow access to light and air, but many of which did not. As Edward Kohn points out in Hot Time in the Old Town: The Great Heat Wave of 1896 and the Making of Theodore Roosevelt, the heat wave was a test for Police Commissioner Teddy Roosevelt and an important moment in cementing his progressive credentials. Unlike in 1934, no one flocked to the beach during this heat wave: there was a ban on the public sleeping in public parks, and so many people crammed on to the roofs of their tenements, hoping to escape the brutal, stagnant temperatures. Among Roosevelt’s attempts to mitigate the disaster included hosing down the streets and handing out free ice. Alas, much of Roosevelt’s good work came too late: the city only began to address the heat wave in a coordinated way on its tenth—and last—day.
* * *

Read more about Teddy Roosevelt--NYC's only homegrown president--in
Inside the Apple: A Streetwise History of New York City.
To get RSS feeds from this blog, point your reader to this link.
Or, to subscribe via email, follow this link.
Posted by Michelle and James Nevius at 12:45 PM