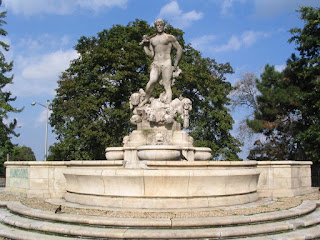 Yesterday, the Daily News—in a column titled “The Eyesore Next Door”—examined Frederick MacMonnies’s Civic Virtue, which is slowly disintegrating in Kew Gardens, Queens. Though the article mentions that the work once graced City Hall Park in Manhattan, it didn’t delve into the fascinating details of this work by one of New York’s great Beaux-Arts sculptors.

Frederick MacMonnies (1863-1937) is best remembered today for his statue of Nathan Hale that still stands in City Hall Park,* but at the end of his own lifetime, he was better known for the controversy surrounding Civic Virtue, which essentially ruined his public career.

The statue’s story begins in 1894 with the death of Angelina Crane, an eccentric, rich widow who lived in the Hotel Brunswick on Madison Square. In her will, Mrs. Crane left $5 to her daughter (who had treated her in “a most undutiful and unnatural manner”), a few thousand dollars to a handful of charities, and the bulk of the money—upward of $50,000—to the City of New York to erect a drinking fountain in her honor.

After a round of lawsuits, in which Mrs. Crane’s daughter was unable to prove that her mother was insane, the city began the process of creating a statue to fulfill Mrs. Crane’s bequest. In 1909, Mayor George “Max” McClellan hand-picked MacMonnies to create the sculpture. (MacMonnies had recently completed a statue of the mayor’s father, Civil War General George B. McClellan, in Washington, DC.) It took MacMonnies five years to create the preliminary designs, which were for a massive work, 57-feet tall, which depicted Virtue (a large male figure) vanquishing Vice (a supine female). The Parks Commissioner and the city’s Art Commission hemmed and hawed over the piece: it was too big; it didn’t take advantage of its proposed location in City Hall Park; it was too architectural for MacMonnies to execute properly. The city told MacMonnies to go back to the drawing board and convinced him to allow architect Thomas Hastings to help him with the new plan. Somewhere along the way, the idea that this be a "drinking fountain" (as stipulated in Angelina Crane's bequest) seems to have been dropped.

In 1919, MacMonnies’s revised (and much smaller) Civic Virtue was approved and the finished work was unveiled in 1922. In the new work, MacMonnies continued to represent Virtue as a club-wielding man, while Vice was now depicted as two female women being trampled beneath Virtue’s feet. New Yorkers were immediately up in arms. Virtue was instantly nicknamed “The Rough Guy” in the press and women complained that MacMonnies was unfairly vilifying their sex. The statue stirred up so much public debate that the city held a public hearing on its propriety. At the hearing, Elizabeth King Black of the National Women’s Party declared: “Men have their feet on women's necks, and the sooner women realize it the better!” Popular Mechanics reported the reactions of passersby: "It ain't art to have a guy stepping on a girl's neck that way"; "Huh, those women represent vice--the man doesn't. That's why the women are kicking about it." 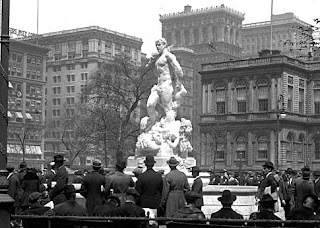 MacMonnies didn't help himself by wading into the fray. "God Almighty made men strong and women beautiful," he told the New York Times. "The female form is used to suggest grace and beauty, being combined with the form of the sea-monster to to suggest treachery and guile....when we wish to symbolize something tempting we use the woman's form." MacMonnies also chided people for misreading the statue, pointing out that Virtue's feet stood on two rocks--not on the two women--and that if women didn't understand their own anatomy that wasn't really his fault.

Despite the bad press and poor public reception, there were no immediate plans to do anything about MacMonnies's work. However, by the early 1930s, the city’s newly elected mayor, Fiorello La Guardia, and his Parks Commissioner, Robert Moses, had began to publically discuss moving the piece. In 1941, the statue was removed from its original basin (which was destroyed) and relocated to a spot near Queens Borough Hall, where it stands to this day. Though MacMonnies defended the work throughout his life, it was his last major public commission in New York and signaled the beginning of the end of his career.

For good pictures of Civic Virtue as it looks today, visit www.bridgeandtunnelclub.com. And if you are interested in the fate of the statue, there's a Facebook group, "Restore Civic Virtue."
* The Nathan Hale statue was put in the park to commemorate the spot
where he supposedly regretted having but one life to give for his country.
Historians now agree that Hale was hanged elsewhere.
* * *

Read more about City Hall Park
(and take a self-guided walking tour of the area) in
Inside the Apple: A Streetwise History of New York City.
To get RSS feeds from this blog, point your reader to this link.
Or, to subscribe via email, follow this link.
Also, you can now follow us on Twitter.
Posted by Michelle and James Nevius at 10:09 AM

Shame on our politicians for displaying their lack of civic virtue and commitment to the arts. I live in Jackson Heights and am passing copies of this article and my own comments out to my neighbors at a meeting in Northridge tonight. Where is our community Spirit and our commitment to the arts? Let's raise some funds, have an auction, solicit former and current Queens residents to save this great American work of art.

I'm glad to see that "Uncle Fred" is still causing controversy and debate :) I hope Civic Virtue is restored to its former glory, it is one of my faves :)

Thanks for a great article :)