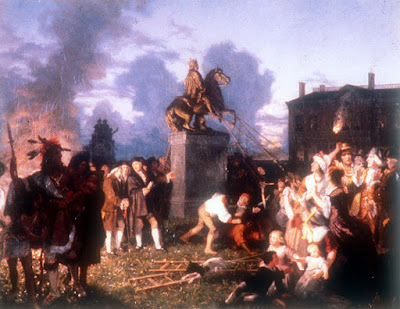 As readers of our blog know, we like to think of America's birthday as not just taking place on a single day -- July 4th -- but over the course of week from July 2nd (the day we actually declared independence) to July 9th (the day New York finally got on board).

So, it's only fitting that as part of our week-long celebration of America's 235th birthday, James will be leading a walking tour of Revolutionary and early American sites in Lower Manhattan on Sunday, July 3, at 4:00 p.m.

Planned stops will include famous places, like Federal Hall, Fraunces Tavern, and Bowling Green (depicted above on night of July 9, 1776), but we’ll also talk about lesser-known sites, such as Archibald Kennedy’s house; George Washington’s presidential mansion on Broadway; Jefferson’s home where he brokered the deal to move the capital of the United States to Washington, DC; and many more. This will be a fast-paced, entertaining, and informative walk back in time.

Copies of Inside the Apple will be available for purchase at the tour.

To reserve, send an email to events@insidetheapple.net with


PLEASE NOTE that if you reserve no later than Tuesday, June 28, the cost is just $10 per person.

This tour will have only a limited number of spaces, so please reserve early to avoid disappointment.

Payment will be taken at the start of the tour by cash only. Directions to the tour’s starting point will be sent out after your reservation is confirmed. All reservations received starting Wednesday, June 29, will be $15 per person.

Read more about New York's role in the Revolution in
Inside the Apple: A Streetwise History of New York City.
To get RSS feeds from this blog, point your reader to this link.
Or, to subscribe via email, follow this link.
Posted by Michelle and James Nevius at 1:25 PM