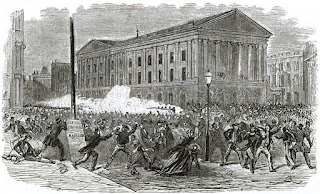 Today marks the anniversary of the Astor Place Riots, and while there were many conflicts in 19th-century New York between rich and poor, immigrant and native-born, this riot stands out. After all, how often do troops fire on citizens who are fighting over rival Shakespearean actors?

In 1849, [the Astor Place Opera House] invited acclaimed British tragedian William Macready to perform Macbeth during his tour of the United States. This annoyed the patrons of the Bowery Theater, who were champions of American actor Edwin Forrest. Forrest had recently returned from a disappointing European tour (where he’d been hissed and booed in London by Macready’s fans), so to tweak Macready, Forrest had embarked on a tour of the same cities Macready was playing doing his rival version of Macbeth. Thus, when Macready was scheduled to appear at the Astor Place Opera House, the Bowery Theater downtown would mount Forrest’s production of Macbeth.

Had this been nothing more than two rival Shakespeareans treading the boards, things might have remained calm. However, the audience at the Bowery Theater, led the rowdy Bowery B’hoys (a quasi-gang), turned it into a violent clash over class and values. Was Macready, an imported British actor, better than Forrest, his American rival? They set out to prove he was not....
On May 7, 1849, Macready took the stage at the Astor Place Opera House and was greeted with rotten eggs, old shoes, and other objects smuggled into the theater by Five Pointers who’d infiltrated the audience. Macready refused to go on the next two nights, but on May 10, he agreed to continue. All the day before, Bowery B’hoys and Isaiah Rynders—a political heavyweight in the Five Points and personal fan of Edward Forrest—had posted flyers around town encouraging people to come to Astor Place. As the flyer announced in all capital letters: Shall Americans or English rule in this city?

By the time the performance began, a crowd of between 10,000 and 20,000 people surrounded the theater, pelting it with bricks and paving stones. New York’s elite militia, the Seventh Regiment, was called in to quell the riot—the first time a military unit had been asked to do so in peacetime. When the crowd did not disburse, the soldiers were given the order to fire and by the end of the evening scores had been injured and eighteen people had been killed; four more people would die from their injuries over the next few days.

It's interesting to note that while today New York is filled with theaters, in 1836 (a decade before the riot) the city still only had a total of five theaters. More astonishingly, the New York Mirror complained this was too many. “The resident population would not more than adequately support one” and visitors “might possibly eke out a respectable audience for two more—but for five! that’s too great a supply for the demand.”
The Astor Place Opera House is now gone, replaced by the Mercantile Library (aka Clinton Hall)--the building with Starbucks in it.
* * *

Read more about Astor Place Riots and the history of the area in
Inside the Apple: A Streetwise History of New York City.
To get RSS feeds from this blog, point your reader to this link.
Or, to subscribe via email, follow this link.

Posted by Michelle and James Nevius at 1:23 PM