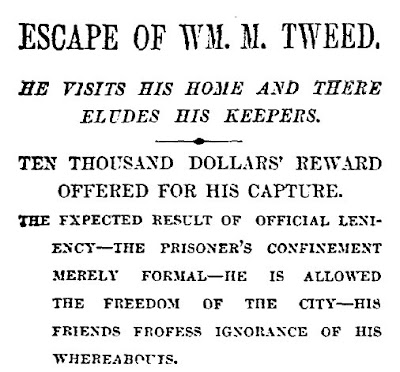 Today, December 4, marks the anniversary of William M. "Boss" Tweed's escape in 1875 from the Ludlow Street Jail on the Lower East Side. (The jail stood on the site now occupied by Seward Park High School.)
To recap the story up to this point: in 1871 Tweed had been arrested for embezzling from New York City; he was accused of lining his pockets with everything from the rental of the city's armories to fake carpenter's contracts at the New York County Courthouse on Chambers Street. As we point out in Inisde the Apple, the projected final costs of the courthouse--now known universally as the Tweed Courthouse--made it twice as expensive as William Seward's purchase of Alaska. 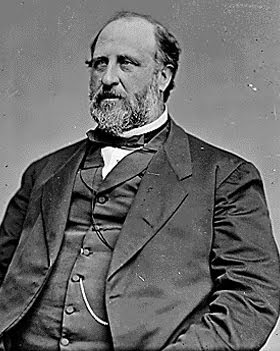 Tweed was successfully prosecuted by Samuel J. Tilden, who would go on to be New York's governor and the 1876 Democratic nominee for the presidency. Tweed was convicted of multiple misdemeanor counts and sentenced to twelve years in prison. However, in doing so, the sentencing judge had violated New York State law, which stipulates a maximum one-year incarceration for misdemeanors. Tweed was freed in 1875, but Tilden, now governor, immediately had him re-arrested. The state had civil charges pending against Tweed and didn't want him to flee the jurisdiction.
Tweed was transferred to the Ludlow Street Jail, but on most days his sympathetic jailers allowed him out to enjoy carriage rides in Central Park or visit with his family. On December 4, after a long day out, Tweed asked to visit his wife, who he claimed was ill. Soon after arriving at his home on Madison Avenue, Tweed excused himself to go upstairs. A few minutes later Tweed's two minders asked someone to fetch the Boss as it was getting late and they needed to get back to Ludlow Street. Moments later, Tweed's son Richard came down the stairs and announced: "Father's gone." 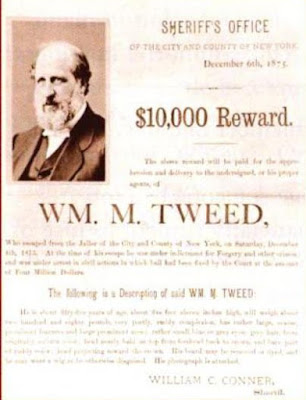 The embarrassed sheriff, William C. Conner, immediately issued a $10,000 reward for Tweed's return. However, the police had few leads and though the newspapers filled their pages over the next few days with speculation as to his whereabouts and erroneous Tweed sightings, it soon seemed that Tweed was gone for good.
He wasn't, of course, but that's a story for another day....

Read more about Boss Tweed in
Inside the Apple: A Streetwise History of New York City.

Posted by Michelle and James Nevius at 7:00 AM