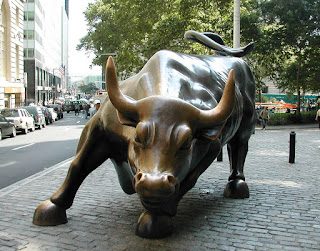 If you worked on Wall Street twenty years ago, you would have showed up to work the morning of December 16th to find a surprise: Arturo DiModica's massive Charging Bull statue nestled underneath the Stock Exchange's massive Christmas tree.
As we write in Inside the Apple:

The 7,000-pound statue was finished in late 1989. Having scoped out Wall Street to discover when the night guards at the New York Stock Exchange would be scarce, DiModica pulled onto the street in a flatbed truck on the evening of December 15, 1989, lowered the bull into place, and took off, leaving behind a sheaf of flyers telling people about his gift. To DiModica’s surprise, a Christmas tree had been put up in front of the Exchange since he’d done his reconnaissance, and so he was able to tuck the bull underneath the tree as a Christmas present. The flyer announced that the work attested “to the vitality, energy and life of the American people in adversity” and that it was “offered honorably”—and free—”in acknowledgment of American dynamics.” *

The statue lasted a day in front of the exchange before Dick Grasso had it hauled away--presumably to be melted down for scrap. It was rescued by Parks Commissioner Henry Stern who unveiled it in its new "temporary" home in Bowling Green Park on December 21st, where it has remained ever since.
It seems that for its first few years in Bowling Green, the statue was paid little notice--it appears rarely in the press or guidebooks from the early 1990s. Today it is one of the most visited--and photographed--spots in Lower Manhattan. Just don't try publishing those photos without DiModica's permission: it may be in a city park, but DiModica owns the statue and the copyright on its image. Just ask the folks at Random House.
* Thanks to Inside the Apple friend Matthew Henry
for sharing DiModica's flyer with us.

Read more about Charging Bull in
Inside the Apple: A Streetwise History of New York City.

Posted by Michelle and James Nevius at 6:01 AM