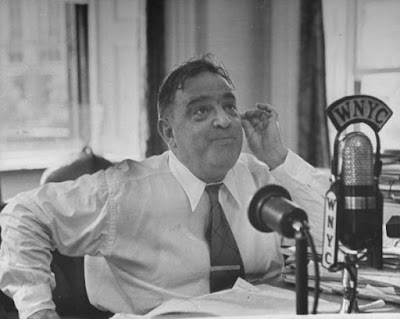 courtesy of the LIFE magazine archive at Google.
Today, December 11, marks the 127th birthday of Fiorello La Guardia, who some argue was New York City's greatest mayor.*
The future mayor was born Fiorello Raffaele Enrico La Guardia on December 11, 1882, at 7 Varick Place.** His father, Achille, was a Protestant musician from Southern Italy and his mother, Irene, hailed from a Jewish family in Trieste. La Guardia was raised as an Episcopalian -- did he attend the Italian-Episcopal Church of San Salvatore on Broome Street as a child? We'll have to research this and find out.
When La Guardia was three years old, his father took the position of bandmaster for the Eleventh Infantry Regiment and the family moved to Fort Sully, South Dakota. At age 18, La Guardia entered the foreign service and returned to New York in 1907 to study law at New York University. A gifted linguist (he knew at least eight languages), La Guardia worked as a translator at Ellis Island before entering politics, first as a Deputy Attorney General for the State of New York, then as a U.S. Congressman. He first ran for mayor in 1929, but was defeated by the incumbent, "Gentleman" Jimmy Walker. By 1933, Walker had resigned in disgrace and La Guardia won easily, serving as the city's mayor until 1945.
La Guardia died in 1947 at his home in the Bronx. That same year, the New York Municipal Airport that La Guardia had championed -- and which was already known to many as LaGuardia field -- was officially renamed LaGuardia Airport. In 1959, La Guardia became to only former mayor to get his own Broadway musical, Fiorello!, which starred Tom Bosley of Happy Days fame as the mayor. The show went on to win the Pulitzer Prize for drama, a rare feat for a musical. 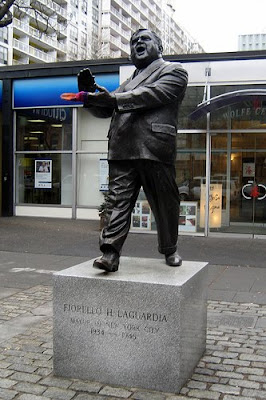 In 1967, then-council member Edward I. Koch introduced a bill to rename a section of West Broadway near the former mayor's Sullivan Street birthplace and on September 25th of that year, Mayor Lindsay created La Guardia Place. If you are in the Village today, go pay a visit to the statue of La Guardia by Neil Estern that was erected there in 1994 and wish him a happy birthday!
* Readers of Inside the Apple will note that our vote goes to DeWitt Clinton -- you can read more about him in the book and we'll blog about him in the future.
** Varick Place was the name for a stretch of Sullivan Street south of Washington Square Park. When the entire street was renamed Sullivan in the 1916, the La Guardia family's residence was renumbered 177 Sullivan; the building collapsed in 1987 during a renovation.

Read more about Fiorello La Guardia, Jimmy Walker,
and New York during the Depression and World War II in
Inside the Apple: A Streetwise History of New York City.