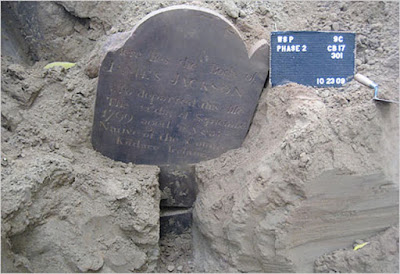 photo courtesy of the New York City Parks Department.
Following up on our post yesterday, the Parks Department has revealed the tombstone that was recently uncovered in Washington Square Park. It reads:

"Here lies the body of James Jackson, who departed this life the 22nd day of September 1799 aged 28 years native of the county of Kildare Ireland."

Posted by Michelle and James Nevius at 1:05 PM