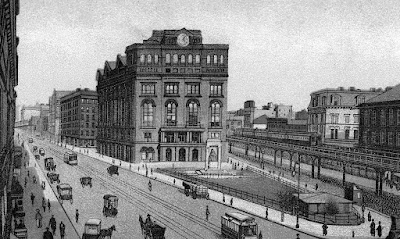 Two great architectural spaces in New York are having free events this week and next that will grant you access to some of the city’s great interior spaces. (If you are not already worn out from last weekend’s openhousenewyork events.*)

On Thursday, October 15, the Cooper Union is continuing their year-long celebration of their 150th birthday with “Great Evenings in The Great Hall: Science and Technology,” a multimedia lecture featuring such notables as Adam Gopnik, Nobel Prize winner Harold Varmus, and a slew of writers and actors. The Cooper Union was founded by industrialist and inventor Peter Cooper, to whom we devote a chapter in Inside the Apple. Among Cooper’s many notable accomplishments, he patented edible gelatin (a by-product of his glue factory), thus giving the world Jell-O. When Cooper Union opened, its Great Hall (where the lecture will be held) was the largest auditorium space in the city and in 1860 it was the site of Abraham Lincoln’s famous “Right Makes Might” speech, which was instrumental in garnering him the Republican nomination and the presidency.

The Cooper-Hewitt was founded by Amy, Eleanor, and Sarah Hewitt who were daughters of Mayor Abram Hewitt (more on him in a later post) and granddaughters of Peter Cooper. It is housed in the former home steel magnate Andrew Carnegie and the house is the subject of another chapter in Inside the Apple.

So, grab your copy of the book and head out to enjoy these two wonderful spaces!


* Many thanks to those who were able to join us for our exploration
of Gramercy Park with openhousenewyork;
we look forward to doing similar tours in the future.

I'm so happy to have found your blog! I am a lifetime New Yorker, living in Brooklyn, and I often blog about New York City.

Blogging has given me the inspiration to photograph and learn more about the people, places, and history of New York.

I'm sure I'll enjoy exploring more your blog. Thanks!