In the last week, we were able to visit three exhibitions currently on view that are tied to the ongoing celebrations of Henry Hudson’s arrival in New York in 1609: New Amsterdam: Island at the Center of the World at the South Street Seaport Museum; Mapping New York’s Shoreline, 1609-1909 at the New York Public Library; and Dutch New York Between East and West: The World of Margrieta van Varick at the Bard Graduate Center. Each show has something to recommend it and together they make a great way to explore the importance of Dutch New Amsterdam and the influence of the Dutch on future generations. 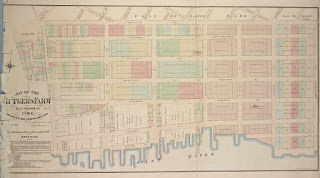 Mapping New York’s Shoreline, 1609-1909
This exhibition has the broadest mission of the three. However, it lacks focus, presenting everything from early views of New Amsterdam to aerial maps of Hoboken, New Jersey. And while the exhibit bills itself as four hundred years of maps, the Dutch period is only slightly represented (and in maps and images that are better seen at the South Street Seaport show; see below).

On the other hand, the show’s overly broad scope is also its strong point: the (late) Lionel Pincus and Princess Firyal of Jordan Map Division is one America’s finest cartographic collections and with such a rich variety of New York maps to choose from, the curators do a good job of illustrating the growth and change of the island over the last four centuries. Particularly interesting is the section on Henry Rutgers’s farm, which occupied what is now the Lower East Side south of Division Street, and the maps that depict how the area was turned into the wealthy suburban enclave in the late 18th and early 19th centuries. (The Lower East Side was gentrified even then!) 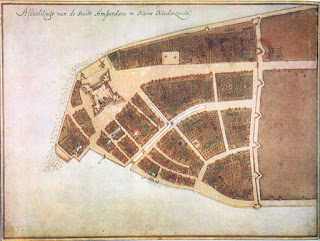 New Amsterdam: The Island at the Center of the World
The New Amsterdam exhibition at the South Street Seaport Museum also features a number of maps, many of them borrowed from the Dutch National Archives, and they are stunning. The best piece in the show is the Castello Plan, the 1660 map of New Amsterdam drawn by surveyor Jacques Cortelyou, which was the first accurate depiction of the city. Many of the images in the collection are by cartographer Johannes Vingboons. Though Vingboons never left the Netherlands, he worked from charts, maps, and other sketches to create incredible watercolor views of Dutch territories from New Amsterdam to Indonesia.

What has been touted most about this show is the inclusion of “Manhattan’s birth certificate” – a letter from Pieter Schagen that mentions the 60 guilder deal struck by Peter Minuit in 1626 to purchase the island of the Manhattan. As we mention in Inside the Apple, there was once an actual deed for this transaction, but it was thrown away or auctioned off over 200 years ago. So what we have today isn’t the original birth certificate, but more of a birth announcement. (Alert the birthers!)

The exhibition is well worth savoring, but don’t expect it to be easy to follow. The rooms are poorly arranged the explanatory text panels are sometimes confusing (or just plain wrong). But that shouldn't stop you from visiting this wonderful show. 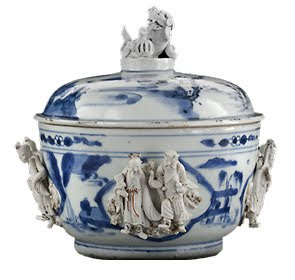 Dutch New York Between East and West: The World of Margrieta van Varick
To round out your exploration of Dutch America, head up to the Bard Graduate Center to get a peek into the sort of life a wealthy New Amsterdammer would have lived.

The show revolves around the inventory of Margrieta van Varick (of the Varick Street van Varicks), which enumerates Margrieta’s extensive holdings when she died in Flatbush in 1695. Having lived in the Netherlands, Dutch-controlled Malaysia, and Brooklyn, Margrieta had acquired a tremendous array of objects. On top of that, she owned a textile shop and would have had goods in the inventory that were her stock in trade. Finding the actual objects listed was impossible; instead, the curators found contemporary examples of the types of things she owned, from a Japanese silk robe to incredible detailed silver children’s toys. If you are interested in New York’s early history or just simply like looking at wonderful decorative art, this show is a must-see.

New Amsterdam: The Island at the Center of the World. On view at the South Street Seaport Museum at 12 Fulton Street. Through January 3, 2010. http://www.southstreetseaportmuseum.org/index1.aspx?BD=9622
Dutch New York Between East and West: The World of Margrieta van Varick. On view at the Bard Graduate Center, 18 West 86th Street. Through January 3, 2010. http://www.bgc.bard.edu/gallery/galleries-at-bgc/main-gallery/main-gallery-exhibition.html

Posted by Michelle and James Nevius at 6:01 AM