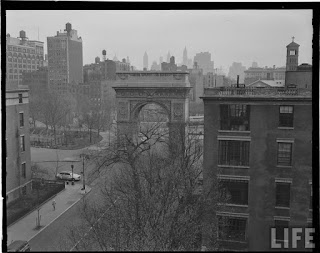 image courtesy of the LIFE Magazine archive on Google.
As has been reported in Gothamist, Curbed, and elsewhere, the WSP blog broke the news yesterday that a tombstone has been unearthed during the ongoing renovations of Washington Square Park.
It is well-known that the park was once a potter's field and by some estimates up to 20,000 people were buried there. (We write about the park's early history in depth in Inside the Apple.) However, what has people scratching their heads is the fact that you don't normally find a tombstone in a potter's field.
The tombstone isn't so mysterious, however. Only a portion of today's park was the potter's field. As Luther Harris writes in his wonderful book, Around Washington Square:

The land area [of the original square]...was about 6-1/4 acres, a respectable public space, but not a grand one. Much narrower than today's square, the potter's field was limited on the east by a strip of church cemeteries, and on the west by Minetta Creek, which ran southwest from the foot of Fifth Avenue to the corner of MacDougal and West Fourth Street. (italics added)

Thus, it seems likely considering where the current excavations are happening that what's been unearthed is a tombstone from one of these church graveyards. The Scotch Presbyterian Church owned the largest cemetery and vehemently opposed the park's usurpation of their land. Perhaps this is one of their brethren? We await a full report.

Posted by Michelle and James Nevius at 2:20 PM