The Contrast by Royall Tyler at the Metropolitan Playhouse 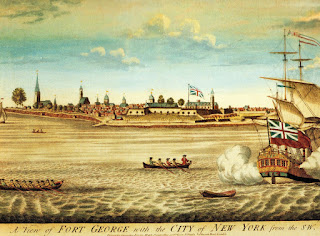 The Metropolitan Playhouse, one of the best small theaters dedicated to perpetuating America’s theatrical heritage, is back with a great new production of Royall Tyler’s The Contrast. Written in 1787, it was the first play performed in the new republic by a professional acting troupe. Set in post-Revolutionary War New York, it provides a fascinating (if exaggerated) glimpse into the city’s residents and their love/hate relationship with Great Britain’s fashions and mores.

Born in Boston, Tyler had served in the Continental Army and after the war was part of the Massachusetts troops that put down Shays Rebellion. On a visit to New York, Tyler saw Sheridan’s School for Scandal and was inspired to write an American version. The play premiered on April 16, 1787, at the John Street Theater (New York’s only theater) and was enough of a success that it was repeated multiple times.

Like many comedies of manners, the story revolves around a love triangle: three women (Charlotte, Letitia, and Maria) are all in love with Mister Dimple, the local fop, who spends his time reading Chesterfield* and practicing bowing in a mirror. Dimple, the audience finds out early on, is from an old New York Dutch family named Van Dumpling; his name change is an affectation following a grand tour of Europe.

The play contains many other New York references, from walks on the “Mall” (perhaps the fashionable end of Lower Broadway) to excursions to the Battery. More importantly, it illustrates that in the decade after America’s victory in the Revolution, New York was caught between forging a distinct American identity and taking its cultural cues from Europe.

At the Metropolitan Playhouse, director Alex Roe makes the very smart decision to eschew the costumes in this costume drama. Instead, the talented company dressed in tank tops, pants, and skirts pantomimes when necessary but mostly just allows the audience to concentrate on the words – which are often hysterical. Particularly funny is the relationship between two servants: Jessamy, who works for (and apes) Billy Dimple, and Jonathan, a clownish Yankee, who serves a former Continental army colonel.

The play opens on Friday, October 9 and runs through November 1. The run time is a little more than 2-1/2 hours with one intermission. Tickets are $20 (with discounts for students and seniors); for more information, please visit http://www.metropolitanplayhouse.org.

* In the 1740s and 50s, the Earl of Chesterfield wrote a series of letters to his son instructing him on manners, decorum, and how to go about finding a rich patron.

Nice article and even nicer print of Fort George. What is date and origin of print/painting?
Thanks.
rr