Postcard Thursday: In the Papers 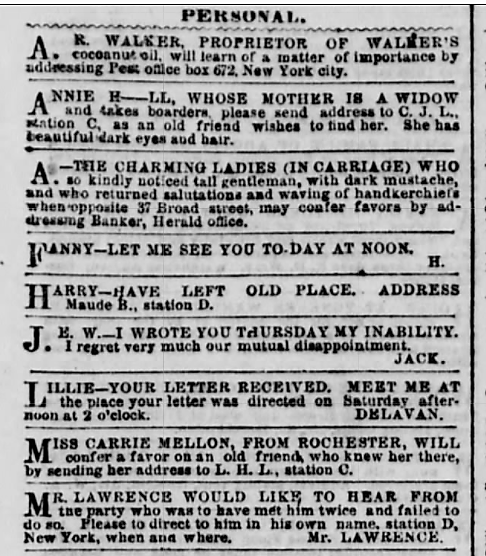 These personal ads graced the front page, first column, of The New York Daily Herald on February 1, 1868 -- exactly 150 years ago today -- and give an insight into how New Yorkers who were not personal friends communicated in the age before Snapchat and dating apps. What makes them so tantalizing is that each advertisement had to be pithy and include only as much information as to make it relevant without revealing anyone's true identity. (Much like Twitter would be if Twitter wasn't a morass of political name-calling.)

They are all good (and just a small sampling of the ads that ran that day) but this is a favorite:


"The charming ladies (in carriage) who so kindly noticed tall gentleman, with dark mustache, and who returned salutations and and waving of handkerchiefs when opposite 37 Broad Street, may confer favors by addressing Banker, Herald Office."

This second advertisement, also from Feb 1, 1868, is from the back page of The New York Times. The notice takes up almost an entire column (see it here) and is for a proposed home for soldiers who'd been injured in the Civil War. 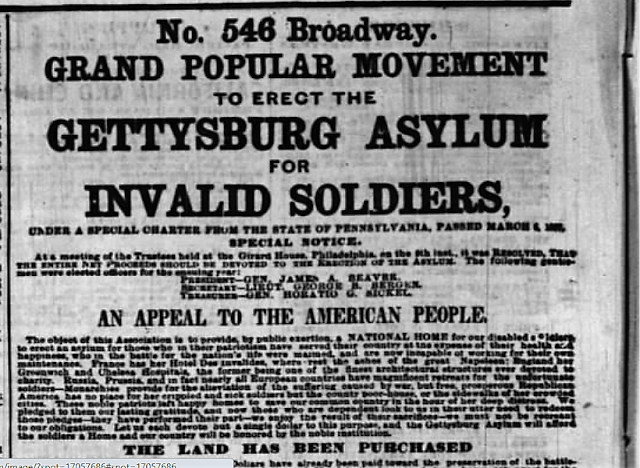 As Brian Johnson notes in "The Gettysburg Compiler":


In the aftermath of the Civil War, the number of men who had suffered debilitating wounds was staggering and the need to do something for them was great. Nearly 300,000 Union soldiers had survived gunshot wounds and nearly 30,000 had suffered amputation. Disease, the greatest killer of Civil War soldiers, probably disabled even more than battle wounds.

A home for wounded and disabled veterans seemed necessary and in the 1860s, as this advertisement attests, fundraising for the project was moving forward quickly. The site, on the very spot where one of the war's most important conflicts took place, seemed fitting. What could go wrong?

The whole thing turned out to be a fraud. The New York backers "authorized an illegal lottery of shoddy diamonds, and appointed themselves...to the board of managers." Then, an "inquiry exposed the Asylum as nothing more than a tax fraud scheme for the benefit of the New York investors. Pennsylvania’s tax laws...could be more easily exploited than in their home state, and the idea of a Gettysburg Asylum for Invalid Soldiers offered the perfect guise."

Posted by Michelle and James Nevius at 11:53 AM