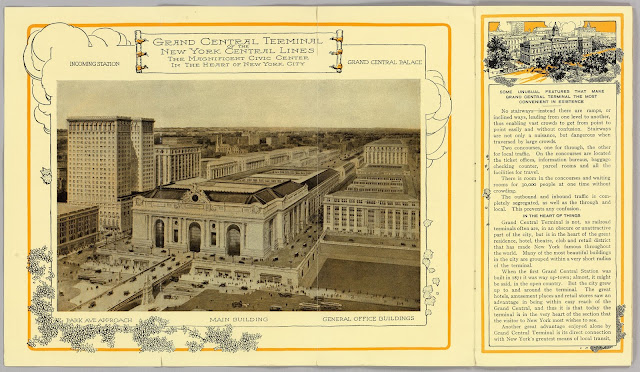 The above advertisement for Grand Central Terminal, produced in 1918, shows the area around Park Avenue and 42nd Street before most of the current skyscrapers were built. (You can see the Yale Club, which James wrote about for Curbed a couple of years ago, on the Vanderbilt Avenue side of the terminal; it opened in 1915.)

On the right side of the flyers is a partial list of some of the "unusual features" that set Grand Central apart from its competitors:

Indeed, this novel system of moving pedestrians around the terminal was a great contrast to the deep staircases at Penn Station. It was later adopted both by other railroad stations and classic airport terminals, such as the TWA terminal by Eero Saarinen at JFK.

Commodore Vanderbilt's original impetus to put Grand Central Station on 42nd Street was a New York City ordinance that forbade steam locomotives traveling farther south. Before 1871, teams of horses were hitched to passenger cars and the carriages were hauled down to the depot farther downtown. Vanderbilt rightly surmised that if the terminal was moved to 42nd, the city would ultimately come to him. By 1918, theaters had moved to Times Square and the IRT subway connected downtown to the Upper West Side via 42nd Street (and a stop beneath Grand Central), making the street the most important in the city.

Read more about New York City history in our two books:
Footprints in New York: Tracing the Lives of Four Centuries of New Yorkers
and
Inside the Apple: A Streetwise History of New York City


Posted by Michelle and James Nevius at 12:26 PM