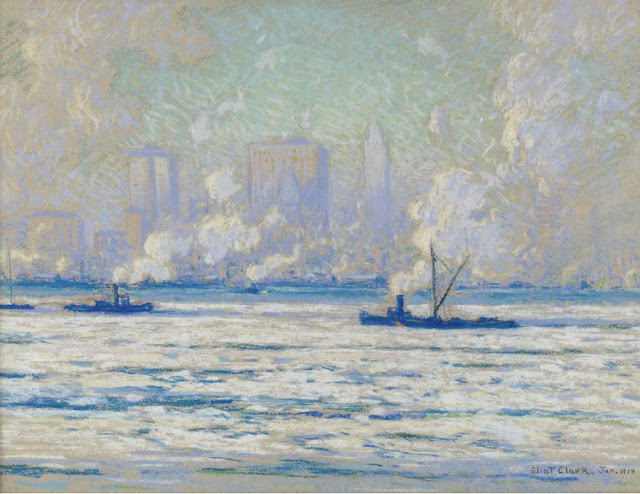 As you hunker down for the "bomb cyclone" bringing snow and cold temperatures to New York City, here's a look back at what the city was suffering through exactly 100 years ago.

The painting above, by American impressionist Eliot Candee Clark, shows the icy Hudson River in January 1918. In fact, the winter was so cold that year that both the Harlem and Hudson Rivers had frozen solid.

As the New York Sun pointed out in its lead story on January 4, 1918, under the headline "COAL FOR CITY NOW TIED UP BY ICE IN HARBOR," the city was facing down a real crisis.


"The fight to get coal to this city -- just enough coal to supply the bare necessities of industry and the homes -- has become a fight against ice. For the next forty-eight hours at least it will be a grim and grinding struggle, with nature piling up the odds against the coal samaritans."

The story goes on to note that the "Hudson River is solid ice down to 200th Street" and the "Harlem River is a glacier to 140th Street...." Exacerbating the problem was the fact that big tug boats had been requisitioned by the government for the war effort, leaving the city with "ice breaking facilities ridiculously limited for a port of this size and importance...."

The rival New-York Tribune noted that 31 public schools were closed due to the coal shortage and that many people had turned to kerosene as the coal ran out, but that, too, was quickly being depleted. Compounding the problem of no heat was the issue of frozen water pipes. As the Tribune reported, Hoboken, New Jersey's "water supply failed completely" and "not a drop of water came from any hydrant" for hours.

The next day, the Sun reported that railroad tugs had broken through the ice, liberating 50,000 tons of fuel that was waiting outside the harbor. As the temperature ticked up a few degrees on January 6, coal was being distributed throughout the city, alleviating the immediate crisis.

Still, they weren't out of the woods: the winter of 1917-18 would go down as one of the coldest on books in many parts of the northeast, remaining unchallenged.... until this year, which could unseat the century-old record.

Posted by Michelle and James Nevius at 12:11 PM