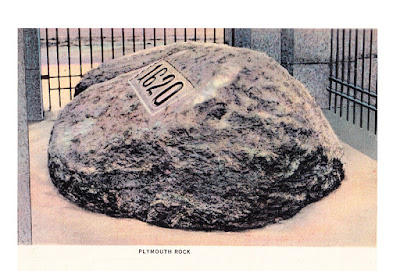 Today, December 21, marks the date the Pilgrims left the Mayflower and landed in the town they'd call Plymouth (or "Plimoth"). According to legend, the first boulder they encountered was what we now call Plymouth Rock, which sits on the shore of Plymouth Harbor inside a classical pavilion.

The story of the Pilgrims is extremely relevant to the history of New York City, because Manhattan was their intended destination. 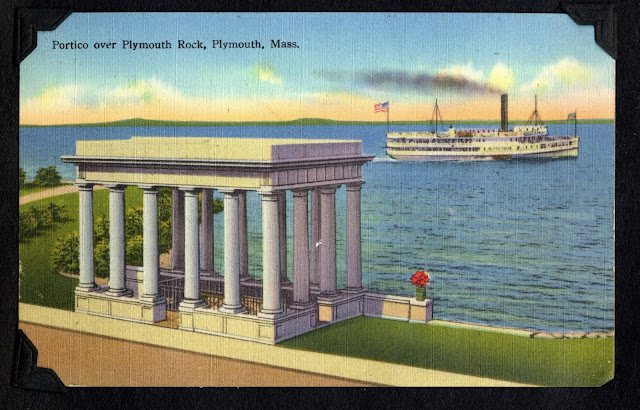 At the December 1776 Pilgrim anniversary, Sylvanus Conant, a descendant of Plymouth resident Roger Conant (who’d gone on to found the town of Salem), preached a sermon in “grateful memory of the first landing of our worthy ancestors” where he laid out the case for the Pilgrims as God’s chosen people. Conant compared the Pilgrims to the Israelites exiled to the wilderness, a “little persecuted flock,” and noted that despite their many afflictions, God “set their feet upon a rock, and established them so firmly that none of the powers or machinations formed against them have been able to pluck them up; but the more they afflicted them, the more they multiplied and grew.”

Conant also compared the persecution of the Pilgrims to the impending war. In the same way the Mayflower’s passengers had fled oppression under King James I, so, too, would the American Revolution throw off the shackles of King George III. Though Conant wasn’t explicit, his meaning was clear: the Pilgrims had come to America as a place of exile; their descendants — by overthrowing the British monarchy of Old England and completing the journey — would truly make New England the Promised Land.

On Forefathers' Day — December 22, 1820 — John Quincy Adams gave a speech in Plymouth where he outlined the Pilgrims as America's true founders. After first dismissing older settlements like the 1607 colony in Jamestown, Virginia (“avarice and ambition had tuned their souls to that pitch of exaltation. Selfish passions were the parents of their heroism”), Adams noted that it was “reserved for the first settlers of New England...to trample down obstructions equally formidable, to dispel dangers equally terrific, under the single inspiration of conscience.” Indeed, most remarkable to Adams were not the religious struggles of these Pilgrims — a term he helped popularize with this speech — but their civic-mindedness. In drawing up and signing the Mayflower Compact while at anchor off the coast of the Massachusetts, Adams argued that the Pilgrims created


the only instance in human history of [an] original social compact, which speculative philosophers have imagined as the only legitimate source of government. Here was a unanimous and personal assent, by all the individuals of the community, to the association by which they became a nation.

Of course, by the end of the 19th century, the story of the Pilgrims would have grown far beyond the confines of New England and become an integral part of the new Thanksgiving Holiday.

Inside the Apple: A Streetwise History of New York City
Posted by Michelle and James Nevius at 3:11 PM