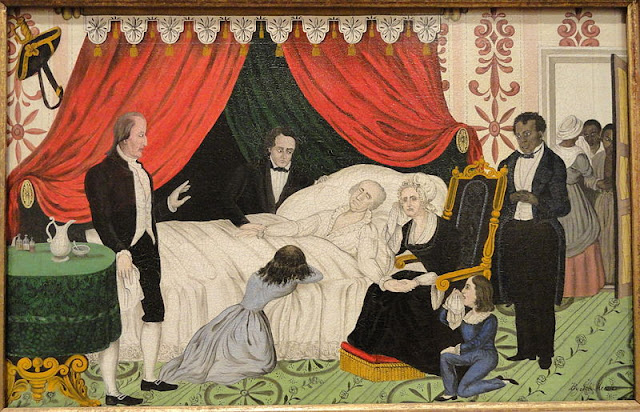 "First in war, first in peace, and first in the hearts of his countrymen, he was second to none in humble and enduring scenes of private life. Pious, just, humane, temperate, and sincere; uniform, dignified, and commanding; his example was as edifying to all around him.... [V]ice shuddered in his presence and virtue always felt his fostering hand. The purity of his private character gave effulgence to his public virtues. ... Such was the man for whom our nation mourns." -- Henry ("Light Horse Harry") Lee


On December 14, 1799, former president George Washington breathed his last at Mount Vernon. Washington was not the first Founding Father to pass away -- Benjamin Franklin had died nine years earlier -- but he was already widely acknowledged as the "Father" of his country and quickly transformed into a symbol of America. Dozens of cities, towns, parks, lakes, and boulevards are named from him across the country, and he is memorialized with countless statues and other monuments. 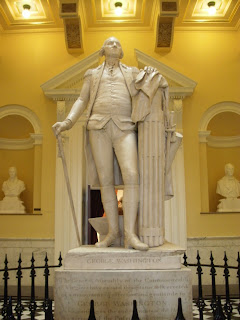 One of the most famous of these statues, by French sculptor Jean-Antoine Houdon, was completed during Washington's lifetime. Houdon was hired by the Virginia General Assembly in 1784 and traveled from France to Mount Vernon in the summer of 1785. He stayed at Mount Vernon that fall, measuring Washington limbs and taking a life mask (below) from which he could work once he was back in France. The statue was completed around 1792 and installed in 1796 in the rotunda of the Virginia state capitol. 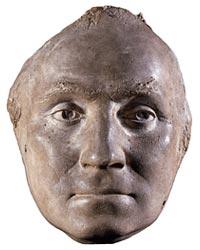 Starting in the 1850s numerous casts of the Houdon statue were made, including a bronze copy that now stands in the rotunda of New York's City Hall. Prior to that (from 1883 to 1907), the work stood in Riverside Park between 88th and 89th Street near the Soldiers and Sailors monument. According to Peter Salwen's Upper West Side Story, the statue had been unearthed in the arsenal in Central Park by parks commissioner Egbert Viele. According to a contemporary guide to the city, "children of the public schools of the city" raised the funds to have the statue erected in the park, very near Viele's home. By 1907, it had been moved to the Metropolitan Museum of Art. According to a 1908 edition of the New-York Tribune, because the statue was only life size and not "heroic size, as statues have to be to look well out of doors," it was taken to the Met to be put on display. When, precisely, it then migrated to City Hall is unclear, though it seems to be sometime in the 1960s.

Of course, New York has many other Washington monuments, including Henry Kirke Brown's equestrian statue in Union Square, JQA Ward's standing figure on the steps of Federal Hall National Memorial, and the Washington Square Arch, erected to honor the centennial of Washington's inauguration.

Posted by Michelle and James Nevius at 11:27 AM