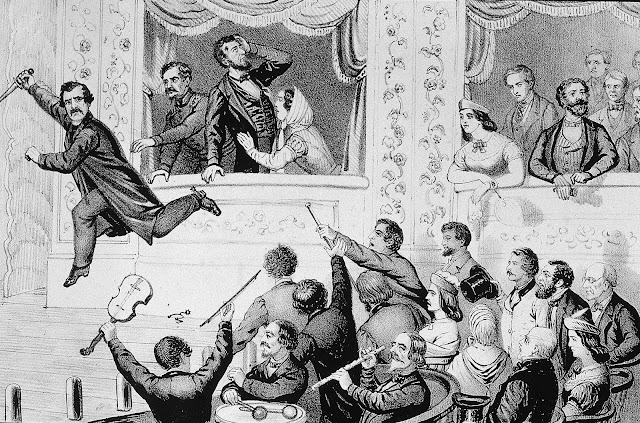 Yesterday, April 26, marked the 152nd anniversary of the death of actor and presidential assassin John Wilkes Booth. Eleven days earlier, Booth had shot President Lincoln in his box at Ford's Theatre. The above print shows Booth in the act of leaping down to the stage (he broke his leg) before his escape.

Booth's connection to New York was tenuous, but he did come to the city from time to time, in part because his brother Edwin was one of the city's most noted actors. As we write in Footprints in New York:


On the evening of November 25, 1864—less than three weeks after Abraham Linclon’s re-election—John Wilkes Booth stepped out on stage of the Winter Garden Theater on Broadway near Houston Street. He was in New York City for a one-night-only performance of Shakespeare’s Julius Caesar co-starring his two older brothers, Edwin and Junius. It was the first and only time the three men would perform together.

John Wilkes Booth is now so infamous that it’s easy to forget that before he shot Lincoln, he was merely famous. Edwin was the bigger star in the family, considered by some to be the greatest tragedian of his age (his statue, showing him dressed as Hamlet, stands in the center of Gramercy Park). But John Wilkes was well known in his own right; when he jumped down from the president’s box at Ford’s Theatre and called out “Sic semper tyrannis!” most people in the audience would have recognized him.

The Booths were from Maryland and embodied the divide in that state at the time. John Wilkes considered himself a Southerner; Maryland may not have seceded, but he certainly owed no allegiance to the Union. Edwin, meanwhile, had already established himself in New York and was sympathetic to the Union cause. This political disagreement, however, did not stop them from joining their eldest brother, Junius, for this benefit performance to raise money for a new statue of Shakespeare by JQA Ward to be erected on the Mall in Central Park.

When the curtain rose on the second act, theatergoers could tell something was wrong. As John Wilkes took the stage, people began to smell smoke. Edwin came out to halt the production and calm the audience. The back doors of the theater flew open and the fire company burst in, trailing their hoses behind them.

It turned out the Winter Garden was not on fire; it was the LaFarge Hotel next door. A small blaze had been set in a stairwell and was easily contained. After the excitement had worn off, the Booth brothers returned to the stage and finished the show, earning a handsome $3,500 toward the Shakespeare statue fund.

People awoke the next morning to find that the LaFarge fire wasn’t an isolated incident. Nineteen hotels...two theaters, and P. T. Barnum’s American Museum had all been attacked by arsonists the night before. As the details emerged, it became clear that there had been a Confederate plan to burn New York. Luckily for New Yorkers, the plan was ill conceived and poorly carried out—many of the fires were set in rooms with little oxygen, so they didn’t spread.

John Wilkes Booth, Confederate sympathizer, left the city under no suspicion—and, indeed, there was no link between Booth and this plot, which was carried out with the tacit approval of the Confederate government.

A month later, Booth was back in New York, and this time he had a rogue plan of his own to help the Confederate cause: kidnapping the president. He visited his friend Sam Chester at his boardinghouse on Grove Street in the West Village to tell him about a “speculation.” They walked down to Houston Street, where they dined at a pub called the House of Lords, then walked up Broadway. At Bleecker Street, Booth decided that it was too crowded to tell Chester anything in confidence; they continued up to West Fourth Street.

Finally Booth told Chester his plan: kidnap Lincoln and other top officials at Ford’s Theatre—which Lincoln was known to frequent—and spirit them away to the Confederate capital at Richmond. They’d ransom them back in exchange for the cessation of hostilities. Chester, who had worked with Booth at the theater in the past, was offered the job of holding open the back door so that Booth could make his getaway. Chester turned Booth down.

Booth went away, disappointed but not dissuaded. By April the kidnapping plan had changed to assassination. (Some argue that the kidnapping story had always been a ruse to get Sam Chester involved.)

You can read more about Sam Chester's Greenwich Village home--and other locations in that neighborhood with dubious ties to historical events, in a story James wrote for the New York Post a couple of weeks ago: "Everything You Know About the Village is Wrong."

Posted by Michelle and James Nevius at 3:36 PM