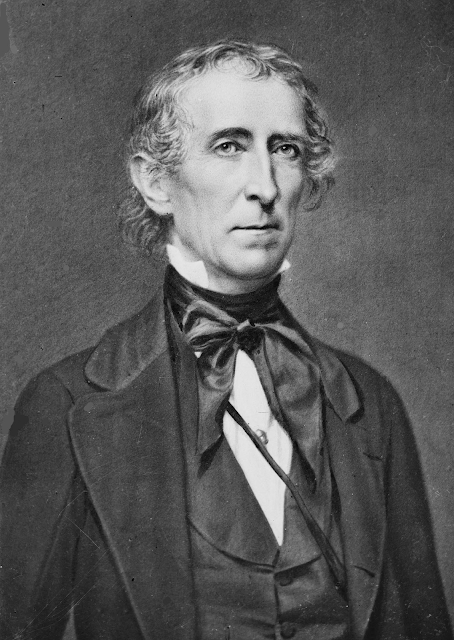 On April 6, 1841, John Tyler became the first vice president to ever assume the presidency; his boss, William Henry Harrison, had died two days earlier just a month into office. (It has long been assumed that Harrison caught pneumonia while giving a lengthy inaugural address in the rain, though that theory has come under fire in recent years.)

The Constitution has no right of succession built in -- and would not have one until the ratification of the 25th Amendment in 1967 -- so Tyler's assumption of the presidency was not a foregone conclusion. Many thought of him as illegitimate throughout his four-year term and he was kicked out of his party, the Whigs, for not stepping aside.

But what does this have to do with New York City? Meet Tyler's second wife, Julia Gardiner, who he married while in office: 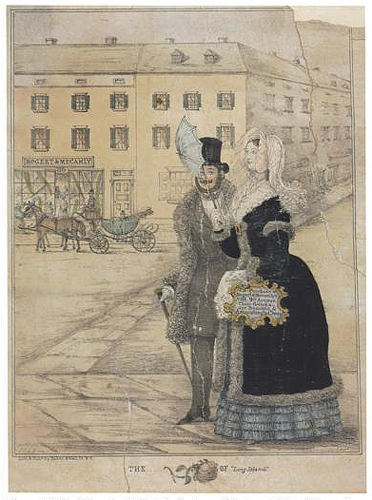 Julia Gardiner was considered one of the most eligible young women in New York. A descendant of Lion Gardiner, one of the earliest English settlers on Long Island, she was both beautiful and astonishingly rich. Today, Gardiners Island off the east coast of Long Island is still the largest privately owned island in America.

Julia was also clearly a rebellious and bored young woman. In 1840, she appeared in a handbill advertisement for Bogert & Mecamley, a dry goods store. Julia stands clutching a handbag that is actually a sign:

Julia was immediately sent to Europe to learn her social graces. Soon upon her return, she met President Tyler—who was less than five months a widower—and the two began an oblique romance. Within a few weeks, he had proposed to her. Julia demurred, but Tyler was not easily dissuaded. In February 1844, Tyler invited Julia and her father, David, to see the first demonstration of the U.S. Navy’s new twelve-inch gun, the “Peacemaker.” The gun exploded in the breech, killing four people—including David Gardiner—and further marking Tyler’s presidency for ignominy.

Four months later, Julia and the President were married at a secret ceremony at the Church of the Ascension [on Fifth Avenue in Greenwich Village], near the Gardiners’ New York City residence on Lafayette Place. Tyler was loath to tell his children about the wedding. His eldest daughter, Mary, was five years older than Julia, who was 24—and the President was himself only nine years older than Julia’s mother.

The new Mrs. Tyler would only be first lady for a few months, but would be a potent force in the Washington DC social scene during her time there.

Inside the Apple: A Streetwise History of New York City
Posted by Michelle and James Nevius at 11:53 AM