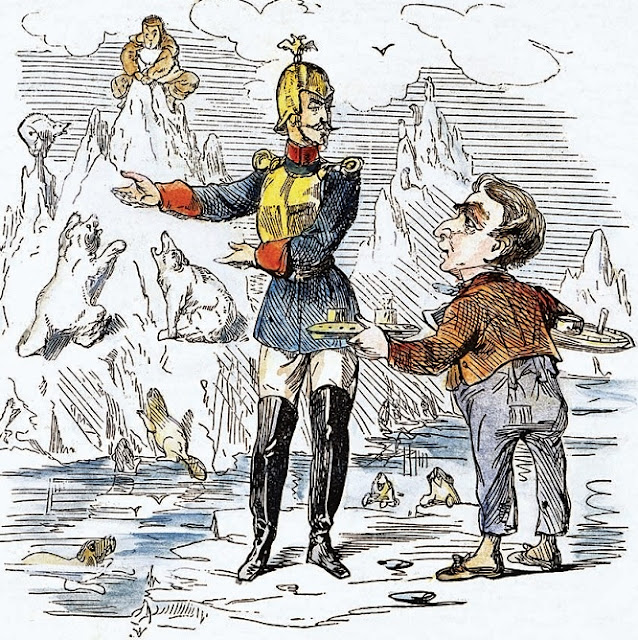 If you follow James on Instagram (which you can do at http://www.instagram.com/james_nevius), you know that we recently traveled to Sitka, Alaska, where we took part in some of the kick-off events for the sesquicentennial of America's purchase of Alaska from the Russians. Many people called the purchase "Seward's Folly" or "Seward's Icebox," and questioned the wisdom of spending $7.2 million dollars for what was then considered useless, frozen land.

The purchase probably would never have happened without the guidance of Secretary of State William Seward, who was very nearly killed two years prior on April 14, 1865, as part of John Wilkes Booth's plan to assassinate Abraham Lincoln.

One of our most popular blog posts of all time is about the attempt on Seward's life (which we liberally crib from below). 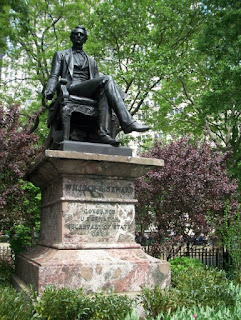 While Lincoln's death at the hands of John Wilkes Booth will likely always be remembered as one of America's most heinous crimes, it should be recalled that Booth and his conspirators had two other targets that night, as well: Secretary of State William H. Seward and Vice President Andrew Johnson. Even though General Robert E. Lee had already surrendered to Ulysses S. Grant--thus ending the Civil War--Booth reasoned that if they could kill the President, the Vice President, and the Secretary of State all on one night, the Union would be thrown into disarray. And, with no formal right of succession (which wouldn't be codified in the Constitution until after the Kennedy assassination; see last week's post), Booth might have had a point.

William Seward was Governor of New York from 1838-42 and Senator from 1848 until becoming Lincoln's Secretary of State in 1861. One of the founding members of the Republican Party, Seward had been many people's first choice to be nominated in 1860 and he received more votes on the first ballot than Lincoln. However, he did not have enough votes to gain the nomination outright and it was his eventual shift of support to Lincoln that guaranteed his rival the top spot on the Republican ticket in 1860.

The night that Lincoln was murdered, Seward was laid up in bed. He had been in a serious carriage accident just nine days earlier that had left him close to death. One of Booth's co-conspirators, Lewis Powell (aka Lewis Paine), talked his way into the Seward house pretending that he was delivering medicine. Stopped on the stairs by Seward's son, Frederick, Powell panicked, attacking Frederick and dashing into the Secretary of State's bedroom. He stabbed Seward multiple times, injured another of Seward's sons and his bodyguard, and retreated into the night thinking he had mortally wounded the Secretary of State. It was only after Powell was captured the next day that he discovered that Seward was still alive.

Seward went on to make a full recovery, continuing to serve as Secretary of State under Andrew Johnson, who was to have been assassinated that night by George Azerodt, but the would-be killer chickened out. It was in Johnson's cabinet that Seward championed the purchase of Alaska.

Note that in the newspaper below it points out that Seward and Lincoln were both assassinated. That's not a typo or "fake news." In the 19th century, the word "assassination" was often used to refer to both the successful and the unsuccessful murder of a political figure. That is, you could be assassinated and live, like Seward. 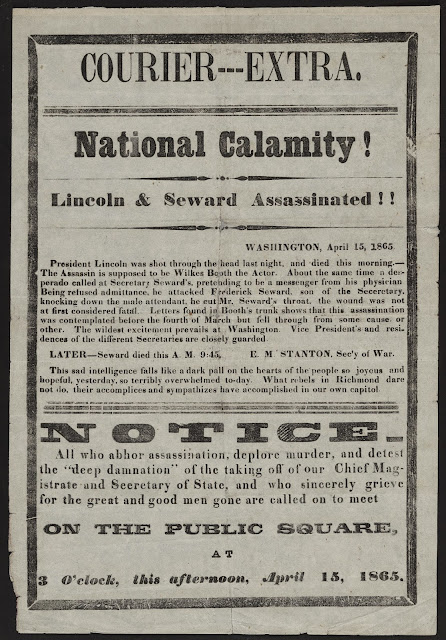 Inside the Apple: A Streetwise History of New York City
Posted by Michelle and James Nevius at 11:26 AM