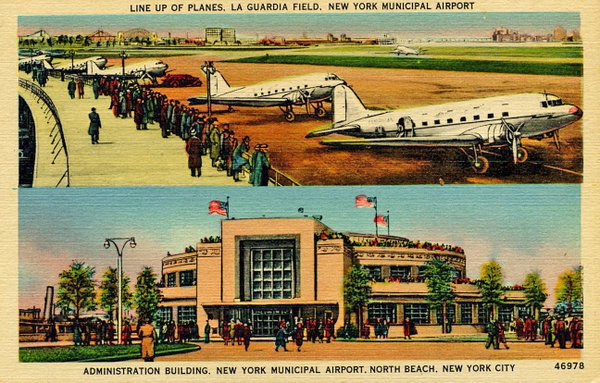 Sometimes, there's a method to postponing Postcard Thursday by a day. (At least that's the story to which we are sticking.) For example, today -- December 2 -- is the birthday of New York City's oldest commercial airport, LaGuardia, which opened on this date in 1939.

The famous story is that in 1934, Mayor Fiorello La Guardia was flying back from Pittsburgh but refused to disembark from his plane in New Jersey since his ticket read "New York." The airline, TWA, agreed to fly him to Floyd Bennett Field in Brooklyn instead. The whole thing was a publicity stunt, as reporters were waiting in Brooklyn to hear the mayor complain that New York City was losing out by not having a major commercial airport.

Five years later, La Guardia got his wish when the New York Municipal Airport, opened in Flushing, Queens. Almost immediately, the term "La Guardia Field," was attached to the airport, and by 1947 the name was officially attached. Somewhere along the line the space between "La" and "Guardia" was dropped.

The oldest building at the airport is the Marine Air Terminal, a wonderful piece of a WPA-era architecture and well worth a look if you have time to kill when you are next leaving the city.

LGA is currently undergoing a massive renovation, scheduled to be finished by 2021.

Posted by Michelle and James Nevius at 10:41 AM