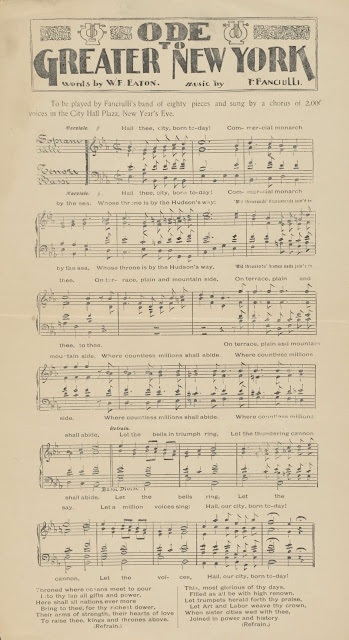 One of the many gems in the digital collections of the New York Public Library is this piece of sheet music for an ode to be "sung by a chorus of 2,000 voices in the City Hall Plaza, New Year's Eve" in 1897.

That night was the last that New York City's territory consisted of Manhattan and a slim portion of the Bronx. The next morning, January 1, 1898, the city would officially consolidate into the five boroughs, with Brooklyn, Staten Island, Queens, and the rest of the Bronx coming into the fold.

The song begins, "Hail thee city, born to-day! / Commercial monarch by the sea," which underlines immediately the reason why the city was expanding. As New York was beginning to see its commercial status erode to cities like Chicago (then second most populous in the country), the unification of Brooklyn and Manhattan was seen as a good way to ensure the city's enduring mercantile prowess. The song's final line -- "When sister cities wed with thee / Joined in power and history" -- is a nod to Brooklyn, which Manhattan saw as having a parallel history and a natural extension of New York's territory.

Brooklynites didn't see it that way. As we write in Footprints in New York:

Just a few years after five-borough consolidation, New Year's Eve celebrations moved from City Hall Plaza up to the newly minted Times Square. You can read all about the Times Tower and the annual ball drop in one of our most popular blog posts here.

Posted by Michelle and James Nevius at 12:51 PM