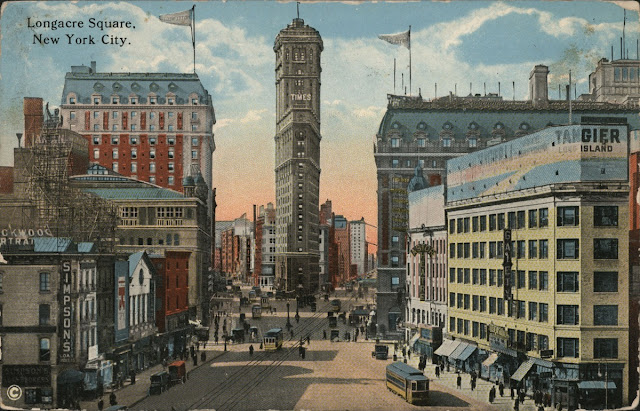 If you had purchased this postcard exactly 112 years ago today, on April 7, 1904, you might have been doing so to commemorate the end of an era. For on April 8, the official name of the little triangle of land depicted here was changed from Longacre Square to Times Square.

As we write in Inside the Apple, at the time, the IRT was hard at work building the first subway line in the city. At the same time, the subway's main backer--financier August Belmont--was


lobbying his friend Adolph Ochs, the publisher of the New York Times, to relocate his paper’s headquarters to Longacre Square.

In theory, it was enough that the new subway connected the growing residential neighborhoods on the Upper West Side and Harlem to the city’s business district below City Hall. However, Belmont realized that to make the subway indispensable, he needed to develop real estate along the 42nd Street corridor as its own, independent business district. So, he turned to Ochs and encouraged him to consider building the Times a new all-in-one editorial and printing plant along the path of the IRT.

Ochs had purchased a controlling interest in the Times in 1896 and quickly boosted the paper’s circulation (by dropping the price to a penny) while raising the standard of its journalism. Belmont had long held a financial stake in the paper and saw the marriage of the newspaper and his new subway as a mutually beneficial enterprise....

To sweeten the deal, Belmont persuaded Mayor McClellan to rename Longacre Square after its new tenant. One of the Times’ chief rivals, James Gordon Bennett Jr.’s New York Herald, had moved to 34th Street in 1894 and their square soon became Herald Square. Belmont argued that the Times deserved the same courtesy; on April 8, 1904, Mayor McClellan presided over the opening of Times Square.

The Times Building was the second-tallest skyscraper in the city in 1904 and the paper boasted that it could be seen from 12 miles away. This, of course, made it an ideal spot to shoot off New Year's Eve fireworks. Three years later, the fireworks were nixed in favor of the famous ball drop.

Of course, today Times Square is known for a lot more than just the newspaper (which is still headquartered in the neighborhood, but no longer on the square). Even when it was still Longacre Square, the area was already becoming the center of the city's theater district.


Again, from Inside the Apple:


In 1895, Oscar Hammerstein opened the Olympia Theater on 45th Street, just around the corner from what was still called Longacre Square.... Though most theaters centered on Union and Madison Squares, the new Metropolitan Opera House had opened in 1883 at Broadway and 39th Street and a cluster of other theaters soon joined it. However, no one before Hammerstein wanted to build farther north. Longacre Square was known for livery stables and—much more important for theater-goers—its lack of electric lights, leading some to call it the “thieves’ lair.” Hammerstein, however, needed lots of space for his next venture, and land north of 42nd Street was cheap. The Olympia promised something for everyone: restaurants, opera, comedies—even a Turkish bath. Most of these features never came to fruition, but the theater itself was a success, proving that audiences would travel to 42nd Street to see a show.

In 1900, Hammerstein opened the Republic on 42nd Street. Three years later, the New Amsterdam had opened across the street, the Lyric a few doors down, and the Lyceum on 45th Street; by the end of the first decade of the 20th century, serious theater goers had abandoned Union Square and were happily coming to the new Broadway theater district. In 1902, the area received a new appellation, “The Great White Way.”

JOIN US AT THE NEW YORK PUBLIC LIBRARY

Posted by Michelle and James Nevius at 10:52 AM