Today's postcard comes from the voluminous digital archive of the New York Public Library (http://www.nypl.org/research/collections/digital-collections/public-domain). We will be drawing on this collection for a number of images for our talk a week from today at the Mid-Manhattan Branch of the library (more details below).

Fraunces Tavern was originally built as the home of Stephen DeLancey and his family, who are the subjects of the second chapter of Footprints in New York. As we write:

As a wedding present, Stephen and Anne received a lot at Broad and Pearl Streets, one of the newest and best pieces of property in the city. Fourteen years earlier...the shoreline on the east side of Pearl Street had been back-filled to create new lots. Anne’s father, Stephanus van Cortlandt, was mayor at the time, and he’d purchased the corner property. Having never developed the land, he now presented it to Stephen and Anne, though they, too, would leave the lot undeveloped for almost two decades.... In 1719, Stephen applied for a strip of land on Pearl Street, three-and-a-half feet wide, to straighten his lot so that he might “build a large brick house, etc.”

By 1720, the Pearl Street house was likely finished, and would have been the family seat until Stephen built their next home, ca. 1730, on Broadway near Thames Street.... It was a large house—a mansion, really, with fourteen fireplaces and a huge kitchen. I can picture the DeLancey children running around inside the house...so it’s jarring that the first thing I encounter upon entering the Pearl Street building is a sign for whiskey.

But I shouldn’t be surprised—no one comes here anymore because it was Stephen DeLancey’s house; they come because this is Fraunces Tavern, George Washington’s final headquarters during the Revolutionary War. It’s this notoriety that has marked the building’s place in history. In some form or another, it has served as a tavern ever since.

Want to know more? Join us next Thursday as we explore all the chapters of Footprints in New York is a fast-paced, image-laden talk at the New York Public Library's Mid-Manhattan Library (40th Street and Fifth Avenue, across from the famous main branch).

We'll highlight some of our favorite stories from the book, including exploring the last days of Alexander Hamilton, the Edgar Allan Poe house in the Bronx, and Jane Jacobs's fight to save Soho. 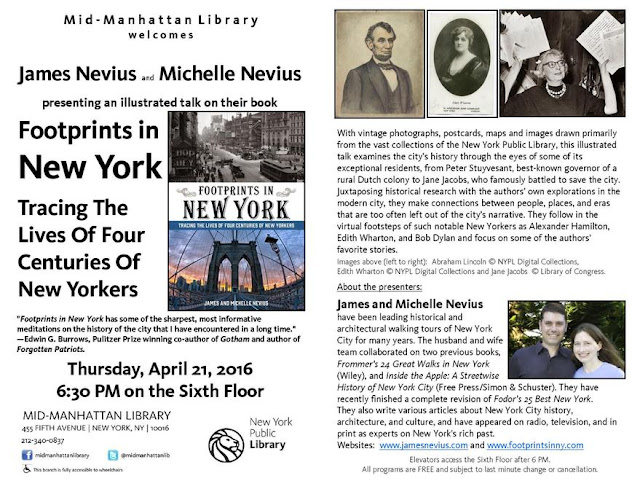 We look forward to seeing you there! Copies of both Footprints in New York and Inside the Apple will be available for purchase and signing.


Posted by Michelle and James Nevius at 12:31 PM