Postcard Thursday: The Crash of '29 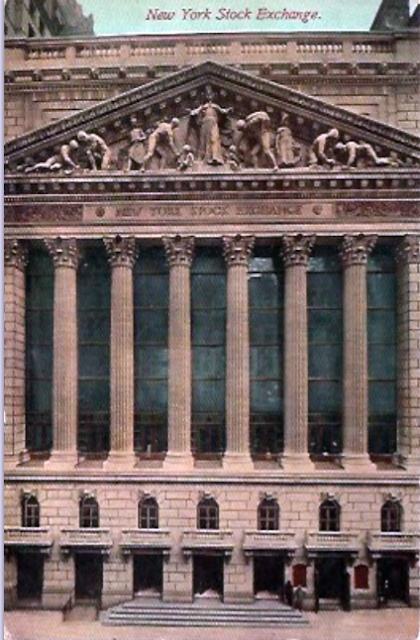 October 29, 1929, was "Black Tuesday," the culmination of events that led the stock market to crash and plunge the United States—and the world—into the Great Depression.

From Inside the Apple:

The New York Stock Exchange, which had surged throughout the 1920s to a new high, lost close to 18% of its value in September 1929, but this had not been enough to truly shake investors’ confidence. Financial prognosticator Irving Fisher, who believed the market was still on its way up, shrugged off the market’s volatility as simply its way of “shaking out of the lunatic fringe.” The first sign of trouble came on Thursday, October 24—later called “Black Thursday”—when 12.9 million shares traded hands. (A normal trading day in the 1920s saw about 3 million shares traded.) The stock ticker, unable to keep up with the volume, fell 90 minutes behind and panic set in.

A group of bankers hurriedly assembled at Morgan’s Bank and pooled $130 million to bail out the market (in a move similar to Morgan’s intervention during the Panic of 1907. The market settled down when Stock Exchange Vice President Richard Whitney strode onto the trading floor in the afternoon and placed an order for 10,000 shares of U.S. Steel. He proceeded to use the $130 million to prop up other stocks and the market closed on a note of confidence. Trading was mixed over the next two days (there was still Saturday morning trading in those days), allaying some fears, but on Monday the slide began. Nervous investors began selling at the start of the trading day and by the close, the market had lost 13% of its value—[at the time] the worst one-day decline in the market’s history....

On “Black Tuesday” the bottom fell out. A record 16.4 million shares traded that day and the market declined an additional 12%—the total losses for the week surpassed the annual federal budget. No pool of investors stepped in to prop up the market this time. By the end of the day, the “Roaring Twenties” were over and though the country wouldn’t realize it yet, it had been plunged into the worst economic downturn in its history, the Great Depression.

The stock market would continue to fall until November 13 when it hit a “false” bottom. General Electric, which had been trading at 396-1/4 in September, was now trading at 168-1/8. However, despite a temporary recovery over the next few months, the market soon began to decline again and by the time it hit its real bottom in 1932, G.E. was trading at just 8-1/2, a staggering loss of 98% of its value. It would take the Dow Jones Industrial Average 22 years to climb back to its September 1929 levels.

Today's postcard dates to sometime around 1910 and shows the facade of the New York Stock Exchange. Notice the building originally had a set of uneven steps up to the trading floor, which were subsequently removed.

Posted by Michelle and James Nevius at 10:45 AM