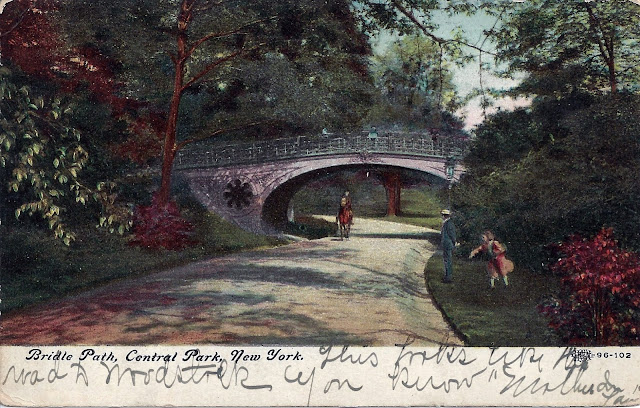 This lovely view of the Bridle Path in Central Park, mailed in 1908, shows one of the few bridges and arches in the park that has been demolished. Called the Spur Rock Arch, it stood where today's Hecksher Playground was later built.

When Calvert Vaux and Frederick Law Olmsted were planning the park's roadways, they incorporated an innovative series of bridges and arches to separate traffic. As we write in Footprints in New York:


Vaux and Olmsted came up with three categories of roadway that they simply called the “Walk” (for pedestrians), the “Ride” (for horseback riding), and the “Drive” (for carriages). All together, there are today about seventy miles of Walk, Ride, and Drive wending through the park. In the master plan, none of these paths ever touched. If the Drive crossed the Walk, a bridge was constructed to pass pedestrian traffic below the carriages. Similarly, the Ride was kept separate from the other paths so that horseback riders would never have to rear up suddenly when confronted with an obstacle....

On its face, Vaux and Olmsted’s traffic plan seems eminently practical, but there was more than simple engineering afoot. Since only the wealthiest New Yorkers could afford a carriage or the luxury of horseback riding, the Drive and the Ride were de facto upper-class thoroughfares. In most places, they were kept at a safe remove from the working-class Walk, though some- times the Drive was paralleled by walking paths, presumably so that poorer New Yorkers could see what they were missing—and so that the rich could set a good example.

Alas, the handsome Spur Rock Arch is no more. According to the book Bridges of Central Park,


Spur Rock Arch, sometimes called Oval Arch, was located on the longitude of Seventh Avenue and the latitude of 61st Street.... It was 25 feet long and rose 12-and-a-half feet above the bridle path....

The distinctive oval outline of its archway and the S-curve sides were repeated later with different dimensions for Gothic Bridge. The ornament of the spandrels was altogether different although both designs stemmed from the Gothic, with Spur Rock's spandrels filled and braced by large wheels with interior cusping, not unlike some church windows. The supporting members were wrought iron; the more finely drawn decorative members were cast iron.

Spur Rock was demolished because it got in the way of the expansion of the Heckscher Playground. Instead of being incorporated into the playground, Spur Rock, probably looking old-fashioned, rundown and unimportant in 1934, was destroyed.