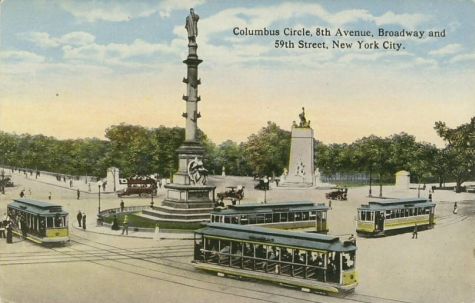 Monday marked the annual celebration of Columbus Day in the United States and the 123rd anniversary of the Columbus statue in the middle of Columbus Circle.

In the years leading up to 1892, Carlo Barsotti, the publisher of the Italian-language paper Il Progresso Italo Americano diligently promoted the idea that Columbus be honored in New York, which was fast becoming one of the largest centers of Italians in the world. Through public subscription, Il Progresso raised the money for a statue to be erected at the Great Circle, and hired Sicilian artist Gaetano Russo to create a monument to be ready for October 12, 1892. It was unveiled in the newly named Columbus Circle as part of the celebrations for Columbus Day.


Of course, today Columbus is not exactly the revered figure he once was. In fact, on Monday, James wrote an opinion piece for the U.S. edition of The Guardian suggesting that it is time that we ditch the holiday in favor of Indigenous Peoples' Day. You can read the article here:

In NYC, Columbus Day is primarily a holiday celebrating Italian-American culture. We are all in favor of that, too. If we get rid of Columbus, what Italian would you suggest we honor in his place? Let us know in the comments.


Posted by Michelle and James Nevius at 9:16 AM