Postcard Thursday: The Naming of Manhattan 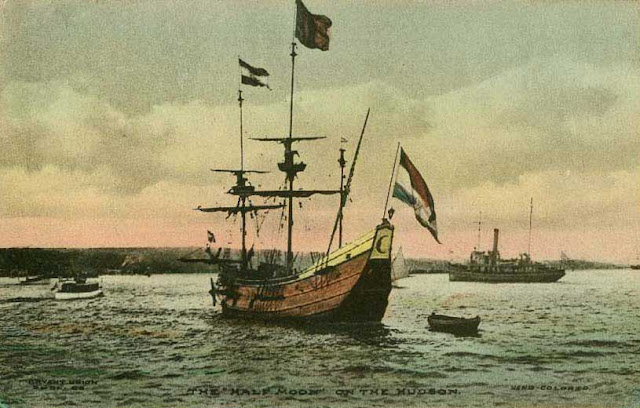 Tomorrow, October 2, marks a little-known anniversary in the New York: the first time the name of the island of Manhattan was written down by a European explorer. The person who did the writing was Robert Juet, first mate on the Halve Maen ("Half Moon"), the ship that had arrived in New York harbor a few weeks earlier in search of a Northwest Passage. While that ship's captain, Henry Hudson, gets rivers and parkways and more named for him, Juet--whose chronicle of the voyage is a fascinating document--is mostly forgotten.

It’s hard to decide where to place Henry Hudson in the pantheon of early American explorers. Like all of them, he was essentially sailing blindly into terra incognita. Had he missed the entrance to New York harbor and sailed home, he’d be little more than a footnote, perhaps known better for the way he died than the way he lived. (Hudson was a bit of a boor. On a later voyage in 1611, his crew, sick of him, mutinied and sent him overboard in Hudson’s Bay, Canada—but that’s another story.)....

Hudson’s arrival in New York harbor was inauspicious; the ship ran aground at Sandy Hook, just south of Staten Island. On September 11, 1609, the ship headed through the Narrows into the harbor. From there, it entered the Muhheakuntuck, the “Great” River. Hudson sailed as far as present-day Albany before realizing that while he’d found a great river, it was not a passage to the Spice Islands....

Today, the best way to get a sense of what Hudson experienced when he arrived, the “very good land to fall in with, and a pleasant land to see” described in the journal of first mate Robert Juet, is to head to Fort Tryon Park in Upper Manhattan and look across at the Palisades in New Jersey. The view here was preserved by John D. Rockefeller, Jr., who originally had plans to develop the Fort Tryon site for personal use before ceding it to the city. It was somewhere near here that the Halve Maen anchored during its journey home. Juet, describing the New Jersey Palisades or the cliffs below Fort Tryon, noted in his journal:

[W]e saw a very good piece of ground; and hard by it there was a cliff that looked of the colour of white green, as though it were either a copper or silver mine; and I think it to be one of them by the trees that grow upon it; for they be all burned, and the other places are green as grass; it is on that side of the river that is called Manna-hata.
Thus, on October 2, 1609, Manna-hata had its name written down by Europeans for the first time and Manhattan was born.

In 1909, New York hosted a giant Hudson-Fulton Festival to honor the city's 300th birthday. The above postcard shows the replica of the Halve Maen that was built for the festivities.

Go to http://blog.insidetheapple.net/2015/09/postcard-thursday-little-italy-walking.html
for details about the tour and information on how to sign up.