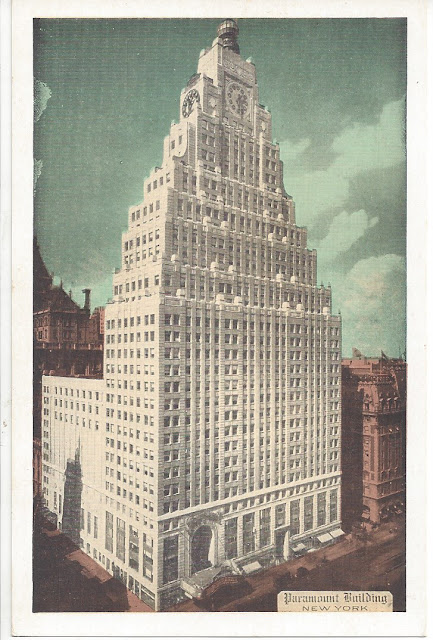 If you stand in the middle of Times Square, you'll immediately notice two things: first, that's a lot of costumed Elmos in such a small space; and, second, one building isn't covered in brightly lit advertising: the Paramount Building.

That advertising is actually required by law:


There shall be a minimum of one illuminated sign with a surface area of not less than 1,000 square feet for each 50 linear feet, or part thereof, of street frontage.

Somehow, the Paramount Building--perhaps due to its landmark status--circumvents the ordinance.

Built in 1926, the Paramount Building was the headquarters of the motion picture company of the same name. Designed by the firm of Rapp and Rapp, the building's pyramidal top was both a response to New York's restrictive 1915 step-back zoning law as well as an homage to the Paramount logo--a mountain topped with stars. In the new building, Rapp and Rapp placed that stars on the four-faced clock atop the tower.

Offices for Paramount were located on the upper stories of the building with a large movie house on the ground floor, designed to mimic the Paris Opera. Later, to boost revenues, Paramount added live shows, including the New Year's Eve 1942 appearance by Frank Sinatra that helped prove he was a superstar. Sinatra came on after Benny Goodman, and Goodman later recalled: “I introduced Sinatra and I thought the goddamned building was going to cave in. I never heard such a commotion with people running down to the stage, screaming and nearly knocking me off the ramp. All this for a fellow I never heard of.”

During World War II, the famous clock was painted black (as were many windows in midtown) to guard against Nazi bombing raids. The clock faces were not restored until 1996.

In 1953, crowds gathered at the Paramount to see the newest Vincent Price vehicle: House of Wax in brand-new 3D.

The theater finally closed in 1964; the space was later leased to the New York Times  and today houses the Hard Rock Cafe. The building was landmarked in 1988.

If you haven't had a chance to pick up a copy of Footprints yet,
you can order it from your favorite online retailers (Amazon, Barnes and Noble, etc.) or
from independent bookstores across the country.
Posted by Michelle and James Nevius at 11:08 AM