Postcard Thursday: The Beginning of the Canyon of Heroes

Since tomorrow the U.S. women's soccer team is being feted with a ticker tape parade, we searched our archives high and low for a postcard of a parade up Broadway, but came up short. (An internet search revealed that few, if any, commemorative postcards of parades have been issued.) 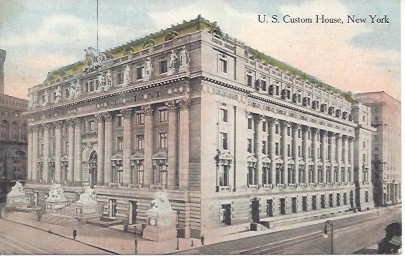 Here, instead, is the image of the building that marks the beginning of the so-called "Canyon of Heroes": the Alexander Hamilton United States Custom House on Bowling Green, which sits at the foot of Broadway in the Financial District. Designed by Cass Gilbert and built between 1899 and 1907, the building is a remarkable expression of Beaux-Arts design, and we'll write more about it in a future blog post.

For now, here's our previous write-up of the history of the ticker tape parade:


[In 1886], the official grand opening [of the Statue of Liberty] in the harbor was followed by a parade up Broadway from Battery Park. It was during that parade that some enterprising office worker in one of the brokerage houses on Broadway decided to turn his company’s used ticker tape into confetti. Thus was born the ticker tape parade, an enduring New York tradition.

The parades took a while to catch on. The next one was for Admiral Dewey, hero of the Spanish-American War, following his return from Manila. Then ten years went by before the next parade, for Jack Binns, the radio operator of the RMS Republic. (The Republic had struck the SS Florida in January; because the ship was equipped with wireless radio, Binns was able to send a Mayday signal and the passengers and crew were rescued.)

In the 1920s ticker tape parades really started to take off. The parades, under the purview of the mayor’s office, were mostly given to arriving dignitaries, sports heroes, or pioneers in flight. The two busiest years were 1951 and 1962, which each had 9 parades. In 1962, honorees were as diverse as John Glenn, the New York Yankees, and Archbishop Makarios of Cyprus.
The Yankees hold the record for most parades at eight. While a handful of individuals have been feted twice (including Glenn), only one person has been honored three times—Admiral Richard E. Byrd, the polar aviator and explorer.

If you find yourself in Lower Manhattan, take a stroll up Broadway from Battery Park. All the recipients of ticker tape parades are commemorated in plaques in the sidewalk.

And, of course, Inside the Apple is available at fine bookstores everywhere.
Posted by Michelle and James Nevius at 12:23 PM