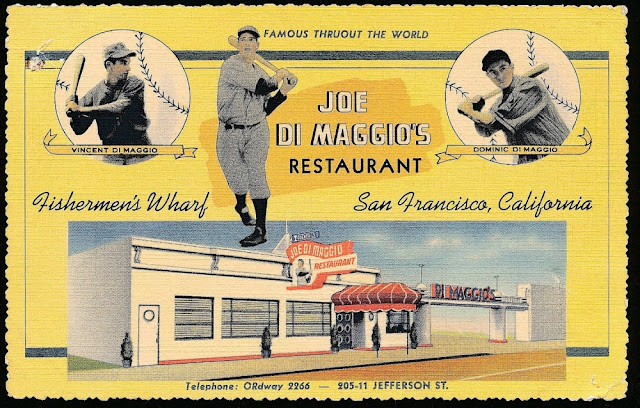 DiMaggio, the son of an immigrant from Sicily, hailed from San Francisco, and grew up near Fisherman's Wharf, where his father worked. As he recalled in his memoir:


Baseball to me in those days was merely an excuse to get away from the house and away from the chores of fishing. When Pop gave up trying to make me work on the boat, I gave up playing baseball in the sand patch by the Wharf, and tried my hand at selling newspapers, a job my father declared suited me perfectly since it consisted mostly of standing still and shouting.

Vince, who had been far more successful than I in baseball, had quit high school to help support the family, although my mother’s advice was to continue his education. Two years later, I followed Vince. Up to the time my baseball playing had been sketchy. In fact, I almost stopped playing when I was 14. Our home was by Fisherman’s Wharf, close to the old North Beach playground, where I had my first baseball experience at the age of ten. I was third baseman in those days and played well enough to be on the usual teams with the kids around my block.

Pop, having despaired of my ever becoming a fisherman, urged me to study bookkeeping. ‘It’s a job you can do sitting down,’ said Pop significantly, for he was convinced I was lazy.

After Joe became a superstar, he and his brothers Vince and Dom opened up the restaurant on Fisherman's Wharf shown in today's postcard, mostly as a way to get their father to retire. It's interesting that while DiMaggio spelled his name with no space between the "Di" and the "Maggio," there's not only a space on the marquee of the restaurant but on most of his baseball cards. It's also interesting that on his earliest cards it's "De Maggio" and that, on some, the manufacturers felt the need to put Joe in quotation marks since it was a nickname. 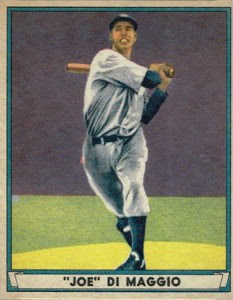 Posted by Michelle and James Nevius at 12:34 PM