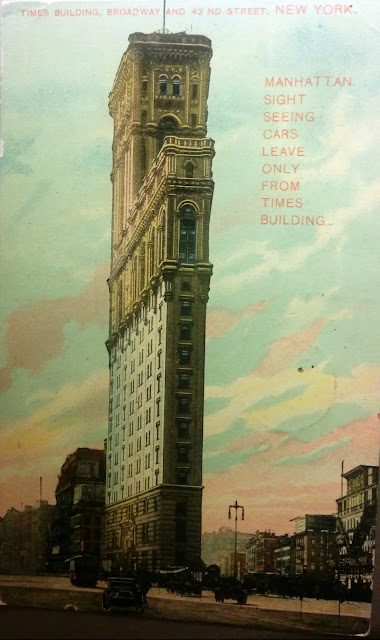 Today's postcard was mailed exactly ninety-seven years ago on July 2, 1908. It depicts what was then one of New York's most noted skyscrapers, the Times Tower, which had been erected a few years earlier in Times Square. Today, that building's been so altered that it is virtually unrecognizable, but billions of people around the world know it well: it's the spot where the ball drops on New Year's Eve. (You can just see the pole sticking out of the frame at the top of the image.)

This image, however, isn't about the Times Tower -- it shows the fleet of sightseeing cars that left from Times Square to take tourists around the city. 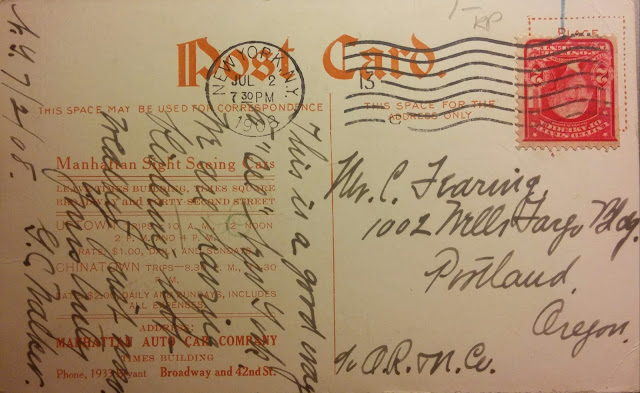 It's hard the read the reverse, but underneath the personal message, it offers an Uptown trip for $1 leaving four times a day or a Chinatown trip twice each evening for $2, including "all expenses." Chinatown tours became very popular at the turn of the 20th century, with visitors being taken to Chinese temples ("joss houses"), restaurants, and sometimes opium dens, almost all of which had been set up exclusively for the tourist trade. These tourist visits upset the police a great deal -- and all of New York's xenophobes, who were trying to force Chinese immigrants to go back to China. Two years later, the police summoned the five sightseeing companies that sold evening trips to Chinatown and told them to cut it out. As The New York Times reported, the police were attempting to make Chinatown a "clean colony," and the tourist excursions were sending the wrong signal. Moreover, the paper of record noted that "the Chinaman is a mysterious being, and there is no telling when he may start a rumpus."

To the best of our knowledge, any police admonition to the sightseeing companies was short lived, and Chinatown remained a key destination for out-of-towners, many of whom had probably never experienced Chinese cuisine or culture before.

Posted by Michelle and James Nevius at 12:20 PM