Will the World Trade Center be America's Tallest?

As you may have read, there is controversy brewing as to whether the new World Trade Center building (formerly known as the Freedom Tower), will be America's tallest building upon its completion.

At issue is the building's spire, which was designed to reach a final height of 1,776 feet, thus marking the year of the Declaration of Independence. This piece of symbolism has stayed with the building from Daniel Liebskind's original master plan through architect David Childs's architectural redrafts. However, back in January, the Durst Organization (co-developers of the building) made the decision to strip the spire of its $20 million cladding, leaving it a bare--and functional--antenna. And there's the rub: according to the Council on Tall Buildings and Urban Habitat, decorative spires count in a building's final height; solely functional antennae do not.

This controversy between functional vs. decorative height can be traced back to the construction of the Chrysler Building, 40 Wall Street, and Empire State Building in the late 1920s.

As we write in Inside the Apple, the contest between 40 Wall and the Chrysler Building to be the world's tallest building was stiff:

In March 1929, the announced height of the Chrysler Building was 809 feet, to be topped with a dome. The Manhattan Company [aka 40 Wall Street] rejoined by announcing it was to be 840 feet. By October, Chrysler’s estimated final height had risen to 905 feet and—after a few last-minute drafting sessions by Severance and partner Yasuo Matsui—the Manhattan Company was revised upward to 925 feet.

But no one knew of the “vertex,” a secret spire that Van Allen’s crew had been assembling inside the steel dome since September. On October 23, 1929, it was set in place. No newspapers carried the story the next day; no newsreel cameras were on hand to record the momentous occasion. Chrysler and Van Allen were happy to keep their secret—if you can call a 185-foot spire crowning a 1,046-foot building a secret—until the time was right.

As Van Allen succinctly put it: “We’ll lift the thing up and we won’t tell ‘em anything about it. And when it’s up we’ll just be higher, that’s all.” 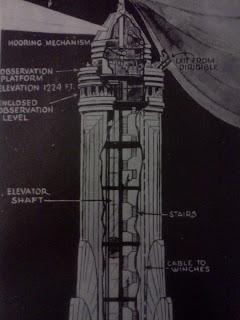 This stunt caused many to cry foul--could the Chrysler Building really be the world's tallest with the simple addition of a decorative spire? The Empire State Building wasn't going to wait to find out.


After William Van Allen revealed the Chrysler Building’s vertex, it became imperative to make the Empire State Building taller without adding a “useless” spire. To that end, Smith announced in December 1929 that the top of the Empire State would house a mooring mast, 1,300 feet from the ground, for transatlantic dirigibles.

It's ironic that the Empire State Building worked to make its spire functional (even if it never would be), when today having a solely functional spire doesn't count toward a building's final height. Of course, to many people the most important measurable statistic is highest occupied floor, which will continue to be held by the Willis Tower in Chicago, whether or not the Council on Tall Buildings decides to count the World Trade Center's spire or not.

get RSS feeds from this blog, point your reader to this link.
Or, to subscribe via email, follow this link.
Also, you can now follow us on Twitter.
Posted by Michelle and James Nevius at 11:31 AM