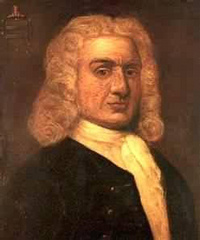 On this date--May 23, 1701--Captain William Kidd was hanged for murder and piracy at the so-called "Execution Dock" in London. Though born in Scotland and hanged in England, Kidd is most associated with New York City, where he lived at the peak of his career.

Today, historians disagree as to the extent of Kidd's outright piracy. Most often, he sailed a privateer with a letter of marque, with the explicit permission to attack enemy ships. A prosperous member of New York's mercantile class, Kidd was friendly with a succession of New York's colonial governors, including Benjamin Fletcher. Under Fletcher, "piracy was a leading economic development tool in the city’s competition with the ports of Boston and Philadelphia."

In 1691, Kidd married Sarah Bradley Cox Oort, an wealthy widow, and they lived on Pearl Street. (Sarah's story is a tangled one for another time; Kidd was her third husband, and they applied for a marriage license only two days after her second husband, John Oort died. Did Kidd have something to do with that?)

Kidd was an active contributor a few years later to the building of the first Trinity Church, Wall Street, lending block and tackle for the hauling of stone and contributing money in pew rent. Kidd never sat in a pew, however; he left New York in 1696 before the church was finished, and was arrested in 1699, having never returned to the city.

One of Kidd's greatest prizes, the Quedagh Merchant, was found a few years ago in shallow waters off the Dominican Republic. Kidd had seized the French East India Company vessel on the grounds that it was a French ship and therefore an enemy of the British. That it was actually an Armenian vessel captained by an Englishman didn't seem to matter. The capture of the vessel branded Kidd a pirate and in a vain attempt to clear his name, Kidd ditched the boat in Caribbean and headed back to New York. He ended up in Boston, was arrested, and sent to England where he was convicted and hanged.

For more about New York in the English Colonial era read
Inside the Apple: A Streetwise History of New York City

Posted by Michelle and James Nevius at 5:18 PM