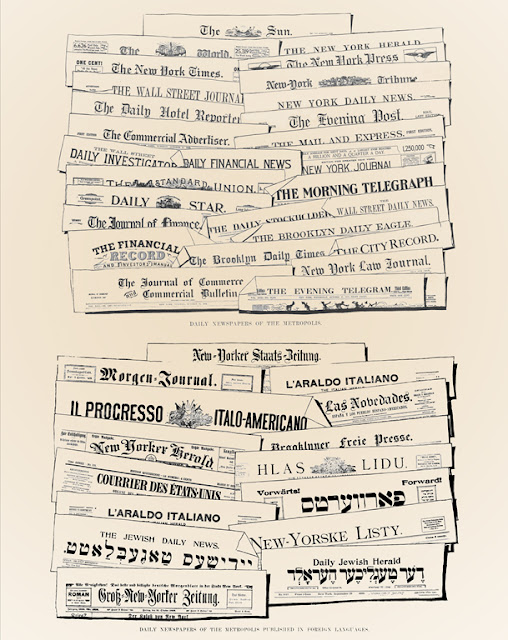 At the end of the nineteenth century, when newspapers were at their peak, there were 43 daily papers in New York City. Most were published from "Newspaper Row"--the blocks of Park Row near City Hall--from grand skyscrapers that were among some of the first truly notable high-rise buildings in the city.

While most of these newspapers are gone and their headquarters have been torn down, the Skyscraper Museum has brought them back to life in their new exhibition "News PAPER Spires," running through July 15th. The small exhibition makes good use of archival drawings, blueprints, photographs, and newspapers themselves to tell the story of some of the city's most famous skyscrapers, including the World, Tribune, and Times buildings. (Of those three, only the Times building still stands--it's the building from which the ball drops on New Year's Eve.)

Of particular interest in Joseph Pulitzer's World tower, which was the first skyscraper to proclaim itself the tallest in the world. Designed by George B. Post (who also built the New York Stock Exchange and City College), the building reached to 309 feet to the top of the dome. It was a "giant among giants" to use the paper's PR terminology, and soon the Times and Tribune were racing to expand their buildings as they increased their circulation. Alas, the World tower came down when the approach ramps to the Brooklyn Bridge were expanded.

The show also focuses on the improvements in technology--from the use of rag paper to the invention of the linotype machine--that kept millions of papers circulating every day.

The Skyscraper Museum is located at 39 Battery Place (next to the Ritz Carlton) and is open Wednesday-Sunday, 12-6pm. If you can't make it in person, there's a virtual exhibition on the museum's website.


To read more about the race to build skyscrapers in New York
check out
Inside the Apple: A Streetwise History of New York City

Posted by Michelle and James Nevius at 10:20 AM