Getting Inside Old New York: Tom Sachs at the Armory and Mark Dion at the Explorers Club 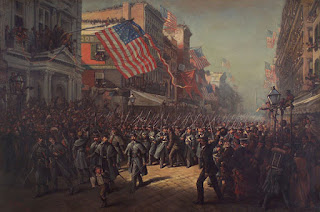 There are two exhibitions running in the city right now--just three blocks from each other--that are not only worthwhile to visit for their own charms, but because they give access to some fabulous old New York spaces.

At the Park Avenue Armory (formerly the Seventh Regiment Armory) through June 17 is Tom Sachs Space Program: Mars, an exploration--in replica, miniature, film, and performance art--of every step of a mission to Mars. The bulk of the show is in the armory's drill hall, but some of the smaller exhibits are in the former Veterans Room and Library, which were decorated by Louis Comfort Tiffany's Associated Artists. These are the most complete Tiffany interiors in situ and definitely should be seen by anyone interested in Gilded Age interior design. As we write in Inside the Apple:


The materials in the rooms are an eclectic assortment, from aluminum foil in the coffered ceiling to recycled wallpaper rollers reused as column capitals. A gorgeous Tiffany fireplace with turquoise tiles stands against one wall of the Veterans Room and the walls are capped by an elaborate frieze depicting twenty great battles from the dawn of history to the modern era.


(Be forewarned, these rooms are poorly lit but still worthy of exploration.)

Also on view at the armory is Thomas Nast's Departure of the Seventh Regiment to War (reproduced above), which hangs in the hallway just to the left of the entrance (near the Veterans Rooms). No matter what your opinion of Nast, this is a great painting.

At the nearby Explorers Club on East 70th Street, Mark Dion's Phantoms of the Clark Expedition (on until August 3) takes a look at the ephemera associated with Sterling Clark's 1908-09 scientific expedition to map China's northern provinces. The exhibition features (in the artist's words) "not only what Clark and his team took from China but also what they brought to the site of inquiry. Thus, the equipment and provisions to undertake such a complex tour are given a new importance that emphasizes the labor of the journey rather than the particular scientific results." Dion and his team have created papier-mache versions of everything from the expedition's campfire to the cages used to haul chickens--there's even a replica of Clark's hat. The show is set up in the Explorers Club's Trophy Room on the fifth floor, a space originally designed to be an art gallery.

The club is housed in a mansion built by Stephen Clark--Sterling's brother--thus forging a connection between the building and the exhibition. It is a great opportunity to get a peek into this space that is normally off limits to non-members.

Read more about the Park Avenue Armory in
Inside the Apple: A Streetwise History of New York City

Posted by Michelle and James Nevius at 11:53 AM